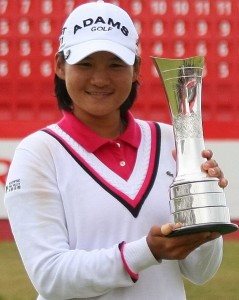 Yani Tseng had a season for the ages in 2011 but somehow flew under the radar of Golf Magazine's editors (Photo: Wikipedia)

Mike Whan wants the answer to a question we posed back in November: Why was Yani Tseng not Golf Magazine’s Player of the Year?

In an undated letter to the editor of the golf publication that tabbed reigning U.S. Open winner Rory McIlroy as its 2011 cover boy, the LPGA Tour commissioner wrote that Tseng’s season for the ages made her “the best player on the planet” by an “overwhelming” margin.

“Yani has emerged as a global superstar and become an ambassador for golf around the world,” said Whan, who recounted for the magazine’s editors, who were apparently otherwise occupied during Tseng’s world domination tour, the 22-year-old ’s achievement of becoming “the youngest player in history — male or female — to win five major championships.”

Whan acknowledged that McIlroy was “a fantastic global ambassador of golf,” but he wondered whether sexism played a role in the editors’ choice.

“You have to ask yourself one question,” Whan said. “If Yani’s 2011 season had been achieved by a man, would you have come to the same conclusion on the 2011 Golf Magazine Player of the Year?

“I think we all know the answer,” Whan stated.

Whan noted that Tseng — with “total wins [she ended the season with 12 worldwide victories], total majors [she posted two of her five this year], records that transcend sport, and leadership in nearly every statistical category” — did not require validation from him, “or anyone else.”

Apparently, Golf Magazine did not get the memo, as Whan stated that her 2011 resume “should have been more than enough for Golf Magazine to reach a very obvious conclusion.”