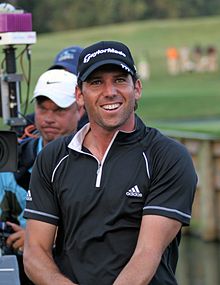 Keegan Bradley has the Twitterati in an uproar for expectorating all over Riviera CC, but Sergio Garcia (pictured) takes the prize for the mother of all PGA Tour spits (Photo: Wikipedia)

Keegan Bradley had the Twitter-verse in a twist during Sunday night’s Northern Trust Open finale. But it was not the 54-hole co-leader’s coughing up the advantage and losing, along with Phil Mickelson, to playoff winner Bill Haas that had TV viewers gagging; it was the 2011 PGA champ’s nasty habit of hocking up a few gobs of slobber during his pre-shot routine that caused a flurry of messages decrying what one tweep termed “Phlegm-gate.”

To be fair, Bradley was not the only golfer in the field last week who gave Riviera Country Club the look and feel of a major league baseball game — without all the incessant scratching and adjusting. Golf Channel and CBS cameras caught Dustin Johnson and Pat Perez discharging a few juicy tidbits as well.

Spitting is hardly a new phenomenon practiced by golf’s new breed. Tiger Woods gets a regular skewering for watering the greens with his spittle, and who can forget Sergio Garcia’s particularly repugnant display of frustration when he left his calling card at the bottom of the 13th hole at Doral in 2007?

But Bradley’s constant spraying, combined with the bazillion practice swings he made before finally taking a swipe at the ball, was just too much for many observers.

“I must say I do like young Bradley’s pre shot routine,” tweeted someone pretending to be BBC commentator Peter Allis, “twitching and spiting like labrador on acid.”

Canadian scribe Bob Weeks wondered whether Bradley’s drooling had run afoul of the Rules of Golf. “If Keegan Bradley horks in the bunker and his loogie lands in the sand,” posited @Bobatscoregolf, “is that a penalty for grounding?

Karen Stupples, an LPGA Tour golfer from England, weighed in as well. “its just disgusting,” tweeted @Kstupples, “and really no need for it!”

And when one of Bradley’s globs trickled down his shirt and never made it to the turf, a member of the Twitterati earned Tweet of the Night honors by opining that last year’s Rookie of the Year “spitslikeagirl!”

We’ll never know what, if anything, PGA officials plan to do about the drooling epidemic that’s rampant on the tour, but Bradley may be hearing from one outspoken spectator who told the world he was not amused by what he saw flying from the lips of Pat Bradley’s nephew.

“I’m amazed he’s got spit still left,” CBS analyst Gary McCord said as Bradley readied his bunker shot on the second playoff hole. “There it is again. I’m going to talk to Keegan about the spitting.”