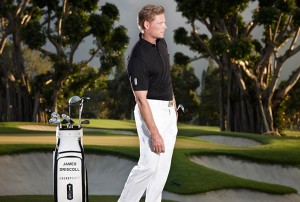 James Driscoll, who raised his profile while raising funds for victims of the Boston Marathon bombing, has signed an endorsement deal unlike any other on the PGA Tour.

While Tiger Woods won’t step onto a golf course without Nike’s signature swoosh emblazoned strategically across his body, Driscoll is taking the field this season draped in couture from several top designers. As part of his new, one-year contract with online golf-apparel retailer TrendyGolf, Driscoll now carries a custom-made staff bag in competition and will model some of his fashions in the company’s lookbook.

Among the designers the Boston native will showcase from week to week will be Armani, Hugo Boss, and J. Lindeberg.

“When I explain [my clothing arrangement] to [other players] I can sometimes see a look of ‘why didn’t I think of that’ across their faces,” Driscoll, in the running at this week’s McGladrey Classic, told us by e-mail recently. “TrendyGolf carries the top brands in golf clothing so it really couldn’t be more ideal; I get to mix and match all the best clothing.”

Driscoll, who has traded harsh New England winters for the warmer climes of Jupiter, Fla., but spends summer months at his Boston home, believes clothes make the golfer.

“Looking good and having golf clothes that fit well is a great feeling,” said Driscoll, who finished among the top 30 in each of his starts last month to kick off the tour’s 2013-2014 wrap-around season (T21 at the Frys.com Open, T28 at the Shriners Hospitals for Children Open).

“It may just be a subtle change but at this level a subtle change can make a big difference,” Driscoll added. “It also just makes it more fun to mix different brands together, keeps it interesting.”

The 36-year-old Driscoll, who will continue using a belly stick until rules banning the anchored putting stroke take effect in 2016, came in 103rd in the 2013 FedExCup standings, which guaranteed him full status for the season now underway.

After the bombings at the finish line of the Boston Marathon killed three people and injured almost 300 on April 15, Driscoll pledged to contribute $1,000 to the OneFundBoston for each birdie he made in back-to-back tour contests — the RBC Heritage and the Zurich Classic. With nine birdies in the first event and six at the second, he provided $15,000 to the charity via his “Birdies for Boston” campaign.

Driscoll, with an afternoon tee time Thursday at the Seaside Course at Sea Island, Ga., will don attire from Lindeberg, Boss, Golfino, Aquascutum, and Tom Morris this week.