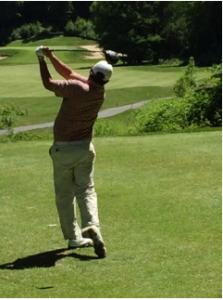 Jason Dufner and Keegan Bradley are ranked eighth and 18th, respectively in the Ryder Cup points race and both PGA Tour pros have Gleneagles on their minds as they work their way through the 2014 season.

“Majors are double points; it was a big week for me to have a good showing,” Bradley said on June 16 about his T4 finish at the U.S. Open (his best outcome in three starts in his national championship) a day earlier. “I really hope I have the opportunity to play for the team and get a bit of redemption.”

Bradley, who spoke with us during an Audemars Piguet-sponsored golf outing at Liberty National Golf Course, referred of course to the soul-sucking 14.5-13.5 loss his U.S. team suffered at the hands of the Europeans (specifically, Euro hero and fellow “ambassador” of the Swiss maker of luxury watches, Ian Poulter, also on hand in Jersey City) at Medinah two years ago. Despite his squad’s disappointing play, the then-Ryder Cup rookie went 3-1, inspiring his mentor and fourball and foursome partner Phil Mickelson with youthful exuberance.

With Mickelson off to the worst start of his Hall of Fame career but just one slot outside the top nine who will automatically earn Ryder Cup berths on captain Tom Watson’s 12-man unit, and Bradley winless on tour for two years, the 2011 PGA champion noted that both players needed to up their games if they hoped to be part of the festivities come September.

“It’s super important for us to go out in the second half of the year and play well,” Bradley said after firing a final-round 3-under 67 at Pinehurst.

Dufner, seemingly safely among those who will punch their tickets to Scotland, was his usual laid-back self during a charity golf event in western Massachusetts last week.

“I don’t worry about things like that [being in the top nine in points],” Dufner told us prior to hosting a golf clinic and participating in a nine-hole skins game at Crumpin-Fox Club to benefit the Jill E. Harrington Hanzalik Foundation. “Play good golf, shoot good scores, you’ll be right where you want to be.”

While Dufner has the “What, me worry?” look down cold, he made it clear his goal was to play in his second Ryder Cup.

“It’s big for me,” said the Auburn University grad, who compiled a 3-1 record in his first Ryder Cup in 2012. “Once you’re part of those teams, you never don’t want to be on them.”

The reigning PGA champion, who lost the same tournament in a playoff in 2011 to Bradley and has since become good friends with the native New Englander, believes he has achieve just about all there is to accomplish in the game at which he makes his living — except hoist the Ryder Cup trophy.

“The only thing I haven’t done in golf,” said Dufner, who said he planned to retire from competitive golf in five years, “is to be on a winning team.”

Both golfers will have a chance to add to their points totals this week at Tiger Woods’ Quicken Loans National.