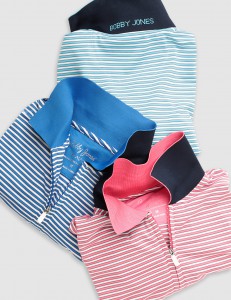 Look for each of those to continue as parent Jones Global Sports introduces its Spring 2014 Collection of performance knit polo tops. Available in late January, the Spring 2014 XH2O line features 12 styles of polo shirt, each with moisture-wicking performance as well as Polyester/Lycra blend construction for quick drying, UV protection (UPF 15) and an anti-microbial shield.

The collection is highlighted by three specific styles of polo – Performance Pique Solid, Hook Stripe and the Bi-Ply Stripe each featuring a flat knit collar with three percent Lycra for added shape-support wash after wash.

Basically, the Bobby Jones apparel brand had been moving in the direction of performance fabrics for the past few years. The XH2O lines brings that direction to the fore (pardon the pun).

“We spent a lot of time in the factory working through a variety of (fabric) options that have stretch and to get to a point where we love the hand-feel of the shirt,” said Jones Global Sports President Andy Bell. “I think for the consumer, that (hand-feel) is still No. 1. You might love a shirt visually but if it feels great, that’s the key. If something looks great but doesn’t feel good, you won’t go near it.

“So I wanted something consumers would be feel great in, whether it’s 100 degrees or 60 degrees outside.”

After that, Bell said, it became a matter of design and how the company wanted to incorporate the classic Bobby Jones art elements into the performance fabrics.

“I think generally people give us a lot of credit for Jacquard arts and patterns and things with three dimensions – some kind of surface interest,” Bell said. “So we were able to incorporate a lot of those ideas into Poly. I think what we have is the best-of-the-best in terms of performance and still maintain the Bobby Jones identity.”