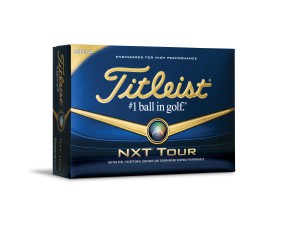 The Acushnet Company today introduced the next generation Titleist NXT Tour and NXT Tour S at the PGA Merchandise Show in Orlando. Each model (suggested retail price $44 per dozen), according to the company, have been improved with a reengineered softer compression core and cover. The Titleist NXT Tour and NXT Tour S balls each are aimed at players who want the Titleist name but might not be quite good enough to play the Titleist Pro V1 and Pro V1 S ball, basically because of slightly slower swing speed.

The new Titleist NXT Tour S golf ball, according to Acushnet, has been reengineered with a softer compression, highly resilient core and softer, thin Fusablend cover to deliver a softer feel on all shots. The new NXT Tour S, Acushnet said, is even softer than the prior generation model as well as the 2014 NXT Tour ball. The NXT Tour S also retains its spherically tiled 302 octahedral dimple design for better flight.