adidas Golf as unveiled its new climachill apparel collection, featuring what it calls “new and exclusive fabric technologies’’ designed to keep golfers cool when temperatures rise on the course. 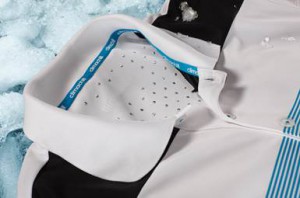 Designed and developed to raise performance levels by helping regulate body temperatures, adidas Golf says its engineers have “revolutionized’’ golf apparel technology with proprietary climachill fabric, engineering the most breathable material the company has ever incorporated into its apparel lines.

Delivering a cooling sensation upon contact with the skin, small aluminum dots were strategically located inside the back neck, one of the warmest areas on the human body. The climachill fabric construction, according to the company, utilizes woven titanium fibers that maximize surface contact with skin. Adidas Golf says the climachill fabric acts like an open mesh to increase air permeability, drawing heat away from the body and allowing for unmatched ventilation and evaporation of sweat to keep golfers cool like never before.

climachill apparel first appeared on the PGA TOUR at The Players Championship earlier this month, and the technology will be featured prominently in the scripting of Sergio Garcia, Dustin Johnson and Jason Day throughout the remainder of the 2014 PGA Tour season.