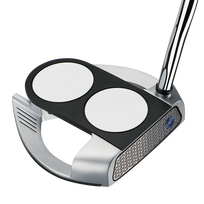 Odyssey Works also has revealed a new head shape – the 2-Ball Fang – that Callaway says it’s the “most accurate’’ 2-Ball putter in its history. In that regard, Odyssey putters probably are the most successful products – and the most consistently performing – over the years in the Callaway equipment catalog.

To find out more about what Callaway calls “Feel Meets Roll,’’ check out this video: https://www.youtube.com/watch?v=52l7k_pE5B4