The Acushnet Company’s new 716 Titleist AP1 and AP2 irons will be available Oct. 23. The company says each iron is “precisely engineered with industry-leading amounts of high density tungsten’’ to deliver the best combination of low CG and high MOI in their respective categories for distance, forgiveness and shot-stopping control.

“AP1 and AP2 irons are designed for two distinct player profiles. AP1 is for players seeking maximum distance and forgiveness. AP2 is for players seeking distance and forgiveness in a tour-proven iron,” said Chris McGinley, vice president of Titleist golf club marketing. “Our R&D team has precisely engineered both models to create speed and launch for distance with maximum forgiveness to help all players improve their iron play.” 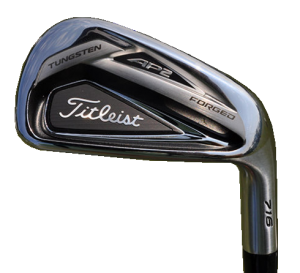 “Golfers looking to improve their games need the best technology available,” McGinley said. “We understand these golfers want as much distance and forgiveness as they can get, but we also know they want to score better. AP1 has technology that will help golfers hit the ball farther with the proper flight to stop the ball closer to the pin more consistently. That’s what good iron play is all about.”

The high density tungsten, according to McGinley, is precisely placed low and in the toe of the long and mid irons, produces a lower center of gravity (CG) for a higher launch angle. The improved launch, McGinley said, allows for stronger lofts, which increase speed for even more distance. The high density tungsten also moves weight to the perimeter, increasing moment of inertia (MOI).

The high-MOI design – with 50 percent more tungsten than prior generation 714, at an average of 42.5 grams of tungsten per head – maximizes heel and toe stability without increasing AP1’s preferred blade length, while producing higher ball speeds across the face for more consistent distance on off-center hits.

“Golfers are getting a double helping of distance with new AP1 without sacrificing trajectory,” said Marni Ines, director of Titleist iron development. “By carving more mass from the undercut and thinning the face, we get more launch and speed. On top of that, we’ve added a significant amount of tungsten, which lowers the CG and increases launch. We’ve taken that extra launch and used it to strengthen the lofts. Stronger loft means more speed. More speed means more distance. There are a lot of companies that chase distance mainly by strengthening lofts and lengthening shafts, but we think we’re doing it the right way, with superior technology.”

McGinley said the new 716 AP2 is Titleist’s most advanced players’ iron, made even better, delivering tour-proven distance with forgiveness and solid forged feel. The new AP2 irons, according to McGinley, use extreme high density tungsten weighting to position the center of gravity low and perfectly aligned at impact for more speed. A co-forged construction places the high density tungsten low and to the perimeter, increasing MOI for greater forgiveness and consistent distance.

“AP2 is the gold standard in the tour-played iron category,” McGinley said. “It’s been one of the most-played cavity back models on the PGA Tour and has been trusted over the years by players such as Jordan Spieth, Zach Johnson, Bill Haas and Jason Dufner. AP2 is also one of the best-selling tour-played irons in the market. Our R&D team knows what tour players and dedicated golfers want when it comes to iron performance and have worked side by side with them over the last two years to make the new 716 AP2’s even better.”

The high density tungsten weighting, McGinley said, creates a low CG that is perfectly aligned at impact to increase speed and distance. The tungsten weights are shaped to perimeter and precisely placed low and out using an advanced co-forging process pioneered for golf clubs by Titleist R&D. The result, according to McGinley, is solid feel and higher MOI.

McGinley said the high MOI design carries an an average of 56.2 grams of tungsten per head, 25 percent more than AP2 714 – drives higher ball speeds across the face for more consistent distance on off-center hits at a tour-preferred blade length that allows workability and shot control. Compared to the previous generation, McGinley said 716 AP2 has 8.5 percent higher MOI in the long irons and 5.5 percent for the full set.

“New AP2 is a direct result of advancements in our co-forging process,” Ines said. “When the development process began, I told my team to design the best club they could, put the tungsten where we wanted it and not worry about whether we could actually make it. We shaped the tungsten to the perimeter of the club and brought it right to the edge so, literally, it’s part of the profile. Incredibly, our manufacturing team figured out how to make it. You can always make a golf club more forgiving by making it bigger, but a tour player doesn’t want to play anything bigger than this. So we had to get more creative in order to boost our MOI. Really, the only way to get the weight farther out now would be to pull it outside of the head.”