Bridgestone Golf today launched its new Extra Soft golf ball. The company says the Extra Soft builds off of the distance and feel in its xFIXx model with an infusion of straighter ball flight and improved short-game control that can benefit all players (www.bridgestonegolf.com). 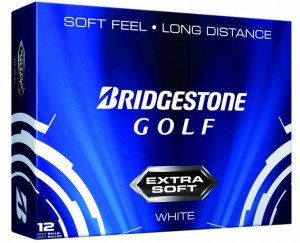 Bridgestone says the Extra Soft’s two-piece construction features a soft ionomer cover and soft compression core for better distance and control.  The Extra Soft core, according to Bridgestone, is designed to be compressed more fully at moderate club head speeds and leads to a reduction in spin producing straighter shots off the tee and from the fairway.

“We’ve seen increased distances off the tee resulting from the Extra Soft’s core during both robot and amateur testing,” said Adam Rehberg, golf ball marketing for Bridgestone Golf. “For the money, you won’t find a better feeling or more consistent golf ball than Extra Soft.  It truly is a tremendous value for recreational players.”