This coming Jan. 1, most forms of “anchoring’’ putters (long and short) will be outlawed by the Rules of Golf, meaning that players – at least those who play the strict letter of the law – will have to stop anchoring long putters against the bodies or use shorter putters. 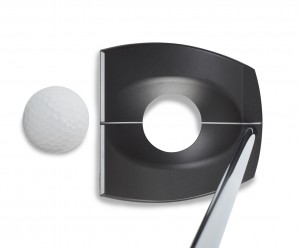 AccuLock says the Ace putter is engineered to produce a more natural and consistent putting stance and stroke. The Ace features a long shaft (allowing golfers to stand up straighter), that is angled slightly forward to put the golfer in an anatomically optimal position.  Once in that position, the grip rests against the inside of the leading forearm, a position that remains legal under the new Rules of Golf.

But more than legal, AccuLock says the Ace putter is the simplest and most accurate putter on the market. Optimizing physiology and physics, the company says the Ace simplifies the putting motion by getting the golfer to stand taller; set up in a consistent, natural, and balanced athletic position; align properly to the target; and make the stroke with the larger, more accurate muscles of the body’s core.

As a result, AccuLock says the Ace gives golfers better control of the stroke, rolls putts that stay on the target line, facilitates dramatically improved distance control, and reduces the back problems and pain often associated with traditional putting.

Check it out. The BioMech AccuLock Ace putter ($suggested retail price $279.99) is available directly from the manufacturer at biomechsports.com, as well as through select green-grass retailers.