Callaway Golf today reported 2015 sales were down five percent versus 2014 to $844M. The company said it earned $14.6 million in 2015, despite two losing quarters, including a $30 million loss in the fourth quarter of 2015. The company’s earnings were in the black only two of the four quarters in 2015. 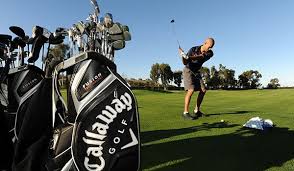 Callaway Golf reported earnings of more than $14 million in 2015

“Overall, 2015 was a strong year for Callaway Golf,” said Callaway President Chip Brewer. “We demonstrated our ability to grow market share across multiple product categories, while at the same time realizing operational efficiencies and increasing profitability.

“One of the highlights for 2015 was regaining a technology leadership position based on our Cup Face technology in golf clubs and the Soft Fast Core technology in golf balls. These groundbreaking technologies and others have contributed to our No. 1 dollar market share position in the United States in total clubs, and in the irons, fairway woods, hybrids and putters categories.”

Brewer didn’t go into detail about how he came to the dollar market share numbers. The company’s 2015 numbers, for example, show that metal woods in 2015 dropped 18 percent compared to 2014.

It’s kind of tough to have a strong year when you core business is down double digits, but credit Brewer for being a good spin doctor.

“As we enter 2016, the company is on solid footing from multiple perspectives,’’ Brewer said. “The balance sheet has been significantly strengthened through the elimination of the convertible debt, our product pipeline is robust and Callaway is once again a leader in the industry.

“Furthermore, we continue to be encouraged by what we see in the golf industry. Participation in the game has stabilized, PGA Tour viewership and excitement are on the rise, and average selling prices appear to be increasing in key markets. Thanks to our improved market share and brand momentum we feel we are positioned to capitalize on any future improvements in industry conditions or foreign currency exchange rates.”

Also today, Callaway announced that its Tokyo-based Japanese subsidiary, Callaway Golf K.K., plans to form a joint venture with its long-time licensee, TSI Groove & Sports Co, Ltd., a premier apparel manufacturer in Japan. The planned venture will be named Callaway Apparel K.K. and will include the design, manufacture, retail and distribution of Callaway branded apparel, footwear and headwear in Japan.