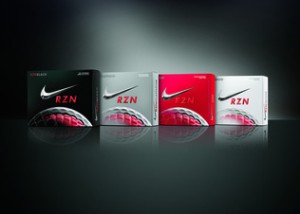 I suppose you have to give Nike Golf credit for trying to get a head start on its competitors in the golf ball market. The company has unveiled its latest generation of RZN golf balls that will be available March 1.

The downside is the fact that by March 1, consumers will have forgotten about the four new models in the marketing hoopla that will surround new introductions from Nike Golf’s high-profile competitors early next year.

Maybe 2014 will be the year Nike Golf finally gets Tiger Woods to play a RZN ball. The Striped One has played the company’s One Tour D ball the past several years.

Nike Golf says each of the four new models – RZN Platinum, RZN Black, RZN Red and RZN White – feature “Speedlock RZN core” technology. The interlocking core design – the core’s surface is similar to that of a waffle iron – interconnects with the compression layer, said to form a tighter bond and help promote better energy transfer through the layers at impact.

Similar to how snow tires utilize aggressive treads to bond with a road surface, Nike Golf says the Speedlock core’s interlocking geometry helps eliminate the slipping that normally occurs between a traditional, smooth-surface core and the outer layer. When a core slides or slips on impact, according to Nike Golf, the ball loses energy and as a result, speed and distance. The company says Speedlock technology helps to harness more energy between layers for faster ball speed, longer distance and more stability into the wind.

“We knew we hadn’t pulled 100-percent of the energy that we could out of the existing RZN core,” said Rock Ishiii, Nike Golf’s senior director of golf product development. “Working in partnership with DuPont we were able to develop a softer and faster RZN material and created the interlocking core design to reduce energy loss at impact. That means more distance, especially with fairway woods, irons and wedges, and softer feel and sound around the greens.

“The lightweight RZN material allows us to add weight to the perimeter of the golf ball, which gives the new RZN family an extremely high Moment of Inertia (MOI) in a golf ball. This provides incredible ball flight stability in all wind conditions.”