The SeeMore Putter Company says it is launching the next giant thing in golf – The Giant FGP.

It sounds a bit weird, but anything from SeeMore and company CEO Jim Grundberg is worth exploring. Nobody in the golf industry knows more about putters and putter technology that Grundberg. 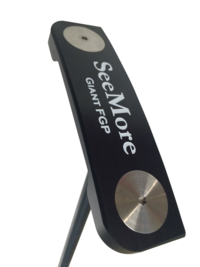 “The Giant FGP started off as a project to create a putter that took everything we knew about putter technology, alignment, and the perfect putting stroke, and enhanced it in every way possible,” Grundberg said. “What we ended up with is a design that is very familiar, yet shockingly different at the same time.

“We literally created a giant size FGP, which functions exactly like the original FGP, just better. It is easier to align, more forgiving, better balanced, and feels great. And the face is balanced to the plane of the stroke, meaning it naturally squares to the target line, just like all of our FGP family of putters. Simply stated, it is more fun to putt with.’’

The Giant FGP (suggested retail price $250 will be available in March.

The FGP design is SeeMore’s most recognizable product – the flagship shape for the brand and the winning putter of two Major championships and more than 20 PGA Tour events in its 15-year history.

The FGP putter, according to Grundberg, design features many technical and functional properties that lead to an unsurpassed bundle of performance benefits. The FGP putter is easy to align with its large blade design and its RifleScope alignment Technology (RST) system. The FGP’s unique straight shaft near center design, Grundberg said, means the head is perfectly balanced to the plane of the stroke path, meaning that the putter face will be naturally square or “on plane” at all times during the putting stroke.

So how did SeeMore improve on the FGP design? It went bigger with the Giant milled FGP, which is 28 percent larger than an FGP on each dimension. The volume (in cc’s) is 2.5 times a standard milled FGP.

“When putting with the Giant FGP you are able to feel and see the putter work on the correct path with ease,” said SPi Director of Instruction and PGA Professional, Ted Gallina, “the larger head maintains the simple benefits of the FGP while enhancing the feeling of Face Balance to Impact – in other words get out of the way and let the putter work for you.”