Although he spends most of his time – when his ailing back allows – on the Champions Tour, Fred Couples remains one of the golf most popular players. It’s hard to believe that Frederick Steven Couples is now 55 years old and first appeared on the PGA Tour in 1982.

In 1982, Ronald Reagan was president, Michael Jackson’s “Thriller’’ album was released and persimmon woods were the preferred technology of players. 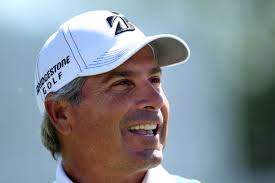 But he remembers the days of persimmon woods and heavy forged irons.

“In the old days, we used to fight for (MacGregor) M85 drivers and Toney Penna drivers,’’ Couple told me at a recent outing at the new Rockwind Community Links course in Hobbs, N.M. “I’d always go to a tournament early to see what kinds of drivers were for sale. There was one guy – Guido – who came to a few events to sell drivers. That was a huge deal. It had to have a good luck and good bulge and roll.

“Nowadays (with metal drivers) is you break a club, a few minutes later you can be hitting the same club because (Tour reps) have that same club. They just screw it on.

“My irons are so much stronger than 20 years ago. I’ve bent my 5-iron as I’ve gotten older so I can hit it farther. In the old days, if you bent your irons, they just got ruined.’’

I asked Couples if he had choose between switching clubs and switching balls, which would he choose? I wasn’t looking for a rah-rah Bridgestone answer, but an observation of what piece of equipment – club or ball – has had more impact on the game the past 20 years.

“In no wind, any ball is good,’’ Couples said. “But I think I’d be more comfortable if I went to tournament and lost my clubs rather than my Bridgestone balls.’’

I think most of Couples’ peers would same much the same thing about their golf balls of choice.