John Karsten Solheim, the oldest son of John A. Solheim and the grandson of Ping Golf Founder Karsten Solheim, today was named president of Ping, effective Jan. 1, 2017. He succeeds Doug Hawken, who is retiring after a distinguished 45-year career with the company that saw him rise from assistant to the production manager to president and chief operating officer, a position he’s held since 1999. 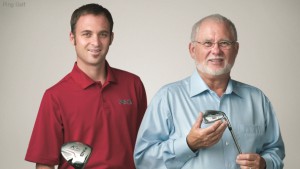 John K. Solheim (left) with his father, John A. Solheim

“It fills me with great pride to name my oldest son, John K., to the role of president of our family-owned company,” said John A. Solheim, Ping Chairman and CEO. “He’s been preparing for this role for the last several years and he’s ready to take the next step. Together with the other third- generation family members and our strong teams throughout the organization, I’m confident John K. will continue to advance our primary goal of engineering innovative, performance-based products of the highest quality while providing unmatched levels of service.”

John K., as he is known within the company, served as an executive vice president for the past two years after a four-year assignment as president of Ping Golf Japan, where he led a successful effort to re-position the PING brand throughout Japan and Asia. Prior to his time in Japan, he oversaw Pings new product development efforts as vice president of engineering.

“I am grateful for this opportunity,” said John K., 42, who is married and the father of four. “I have aspired to this for most of my career. Such responsibility is something I don’t believe you can ever be completely ready for, but I am certainly prepared.

“We all know a lot has changed since my grandfather entered the golf industry more than five decades ago. But what hasn’t changed is the foundation Karsten built here at Ping. We are committed to making the best golf products in the world to help golfers play better and enjoy the game more. I look forward to working even more closely with my dad and the rest of the third-generation family members as we focus on continuing to grow Pings reputation as an industry leader. We’ve built tremendous teams across all disciplines within the company, which has put us in a position of strength in a challenging industry.”

The company also announced that current Chief Financial Officer Mike Trueblood has been promoted to Executive Vice President Operations/CFO. He will assume additional responsibilities related to the company’s day-to-day operations.