The Acushnet Company unveiled the latest generations of its Titleist Pro V1 and Pro V1x golf balls at the PGA Merchandise Show in Orlando. The company says each model is longer and more durable than its predecessor and features new core and cover technologies. Each model also has an improved Urethane Elastomer cover and paint system Acushnet says results in longer lasting durability while retaining a whiter, brighter finish. 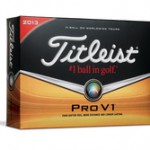 “This is the softest Pro V1 we’ve ever made,” said Bill Morgan, senior vice president of golf ball research and development for the Acushnet Co. “Due to the softer ZG process core technology,  the new Pro V1 has a lower, more controlled flight with lower driver and long iron spin that results in a shallower angle of descent, providing golfers with even more distance. That softer compression also makes this the best-feeling Pro V1 yet and gives golfers an even greater sense of control with shots into and around the green.”

The new Pro V1x is a four-piece multi-component design that utilizes the ZG process center within its dual core, Morgan said,  to maintain lower driver spin for exceptional distance while increasing iron spin for control into the green.

Pro V1x, Morgan added, also produces a slightly different launch condition than the prior generation model, and will fly a little bit lower with a tight ball flight, yet still maintain a deep downrange peak trajectory.

The new 2013 Pro V1 and Pro V1x golf balls each will carry a suggested retail price of $62 per dozen, meaning the balls will sell in most retail outlets for around $47.99 per dozen.