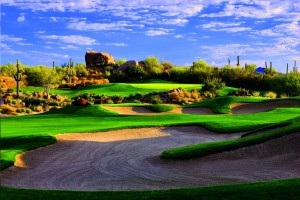 Troon Golf, the world’s largest golf course operator with more than 270 facilities around the world, is now the outright owner of Troon North Golf Club after buying out its partner in a $45 million-plus deal.

Garmany, whose Scottsdale, Ariz.-based group was involved with Troon North since its inception more than 20 years ago, said there was an agreed-upon marketing process with controlling partner PCCP (Pacific Coast Capital Partners), and “we matched the deal.”

Terms of the transaction were not disclosed. Troon North, whose Tom Weiskopf-designed Pinnacle and Monument 18-hole layouts are perennially ranked as two of the country’s top-100 courses, was being marketed for $45 million-$55 million, according to sources familiar with the deal.

When asked if that was a good price target, Garmany said that was a “good range.”

“It was the largest stand-alone golf course sale we’re aware of and certainly been a part of,” said Woolson, managing director of CBRE’s Golf & Resort Properties division.

In the most recent America’s Best resort course rankings by Golfweek magazine, Troon North’s Monument course was ranked No. 80 and the Pinnacle was No. 81.

“We’ve owned it before and now we own again, 100 percent,” said Garmany, whose organization now owns and/or operates more than 270 courses in 38 states and 31 countries. “It’s our namesake, and a property we’re proud to have.”