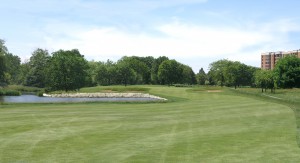 The addition of “Bridges” to the club moniker parallels installation of eight wood bridges along the 6,500-yard course.  Plaques paying tribute to professional golf legends Bobby Jones, Chick Evans, Samuel Ryder and Babe Zaharias will adorn the bridges with capsules about their significant contributions to the game. They symbolize linkage of the club’s storied past, present and future.

“Golfers who sneak-previewed the course are enamored with the changes,” says Brian Bechtold, general manager at Bridges of Poplar Creek Country Club, owned and operated by the Hoffman Estates Park District (HEPD). “And paying homage to some of golf’s grit-and-grind legends aligns with our municipal facility’s family approach to golf and social activities.”

Fifteen holes underwent renovation, and No. 1 is now No. 10 to add excitement down the stretch. Holes 16, 17 and 18 – now known collectively as “The Final Charge” – are formulated in the shape of a lightning bolt to become a “trifecta of finishing holes among the best in Illinois,” says Bechtold.

The addition of multiple tee boxes gives the course renewed appeal to better golfers seeking added length and new golfers seeking shorter distances. Reconfigured fairways and bunkers, the addition of fescue on many holes for depth and definition, and new lakes make for challenging yet fair land-water hazards.

Other new changes are a 9,100 square-foot putting green and a 3,500 square-foot bentgrass chipping area for a state-of-the-art learning center totaling 8,700 square feet. PGA-certified instruction on a 55-station driving range, plus the addition of a “FlightScope launch monitor” for scientific club fitting, has golfers improving their games.

The clubhouse received a major facelift and a now boasts a modern-era ambiance. In the main banquet room that holds more than 300 guests, there is new carpet, wallpaper, lighting, paint, ceiling construction, bathroom upgrades and a new dance floor. Business meetings are first-class with WiFi, screens, LCD projectors and other accoutrements.

A new, 8,200-square-foot event area with a majestic gazebo and waterfall makes for memorable weddings and other special occasions.

The HEPD won the 2009 National Gold Medal Award for Excellence in Parks & Recreation Management, the highest national honor in the public recreation category.