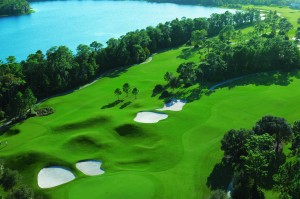 Orlando, Fla. – Imagine waking up today and seeing Tiger Woods and numerous other top professional golfers playing a private two-day tournament on your backyard golf course.  For resident members of Lake Nona Golf and Country Club, that’s precisely the plan as the Tavistock Cup tees up for the ninth consecutive year in Orlando.

The opening matchup is a foursome to follow with Woods and Team Albany partner Justin Rose going against Charles Howell III and Bubba Watson of Team Isleworth, the cross-town private club community that started this rare sporting event. For early drama, Rose is coming off his first World Golf Championship victory at Doral Resort, defeating Watson by one shot.

The Tavistock Cup has become one of the most unique golfing events of the year as tickets are not sold to the public. Only club members, sponsors, designated charities and invited guests are able to attend the two-day event. Once in, there are no ropes separating the world’s best players from the spectators.

The tournament will be broadcast live on the Golf Channel in the U.S., Canada, China and Japan and airs on international affiliates throughout the United Kingdom, Australia, Latin America and South Africa. TavistockCup.com will feature real-time live scoring of the 2012 Tavistock Cup.

Each year, Tavistock Cup contestants play for prize money, team hole-in-one prizes and the title of World Golf and Country Club Champion. But the tournament also exists to raise money for many worthy causes. The Tavistock Cup has generated more than $7 million for charity in its short history. In addition to various player charities, a number of major beneficiaries include The First Tee, Orlando Minority Youth Golf Association, M.D. Anderson Cancer Center, The UCF Foundation and the Sanford-Burnham Medical Research Institute.

Following is a look at the four private clubs represented in this Tavistock Cup: