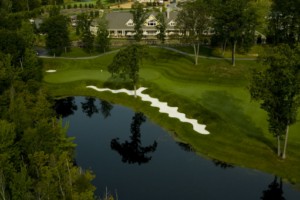 Standwood, Mich. – A sales concept borrowed from the auto industry that allows home buyers to trade in their home for a new one at Tullymore Resort is paying off handsomely for the Mid-Michigan golf resort.

In less than six months the resort has recorded sales of 10 single homes and condominiums worth $4 million. In each case the resort bought the homes of their new buyers for its appraised value on condition that the owners buy a Tullymore property.

Terry Schieber, Tullymore’s chief executive officer, said the home trade-in program is gaining momentum as the message circulates about the benefits for homeowners who want to relocate, or are having difficulty selling their homes.

While some purchasers came from nearby communities like Midland and Big Rapids, others are from as far away as West Bloomfield, Battle Creek, and East Lansing.

Bill Young, who recently took a job as the sales manager of a Big Rapids auto dealership, said he and his wife, Linda, are still pinching themselves over their recently complete home swap deal with Tullymore.

“I had heard about the Canadian Lakes area and heard that Tullymore was the premier golf club in the neighborhood but never thought I would be able to afford living there,” he said.

After starting his new job he rented an apartment and began house hunting.

“Of course selling my home down state was a stumbling block, and I had seen something about the home trade up program at Tullymore on line and dismissed it as ‘yeah right,’ a kind of offer that is too good to be true,” Young said. “One of our customers who lives out there kind of bullied me into it, or at least into checking it out, and sure enough, it’s as good as advertised.”

The Young’s home in Battle Creek that Tullymore took off their hands was built in 1964 with four bedrooms and two and one-half baths. Their new one at the resort is a three-bed room, two-and-one-half bath model.