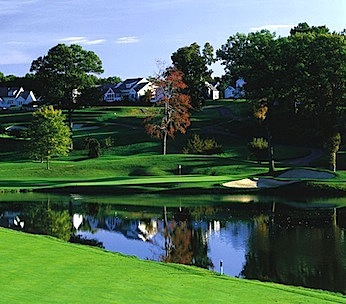 The 17th at TPC River Highlands. This is the approach shot on this par-4 today. At Edgewood, it was a par-3 whose teebox was located left of this spot, benched into a hillside.

Yep, just three month after bringing in Pete Dye to renovate Edgewood Golf Club, our home course, they kicked us off forever. As mentioned in Part I of this post, there would be no Wesleyan University matches played at the TPC at Cromwell. No getting skunked there by the studs from Central Connecticut State, The University of Hartford, Williams and Amherst … No elbow-rubbing with Tour players… Even more tragically, there would be NO FREE PRACTICE ROUNDS there.

The Wesleyan Golf Team would move its “home” to Lyman Orchards GC in Middlefield… We would lose matches there, too…  We would graduate and most of us would move away from Greater Middletown… Architect Bobby Weed would come in and morph the TPC at Cromwell into the TPC at River Highlands… And neither my Wes teammate Stuart Remensnyder nor myself would play the celebrated finished product — until, that is, we hooked up for our fateful reunion round a few years back.

And what an enjoyable and thoroughly bizarre round of golf that was. We spend a lot of time trying to reconcile the new with the old. To wit:

• The dramatic 17th at River Highlands, the signature par-4 which today requires water crossings on both the drive and approach shots, used to be a par-3 at Edgewood — to the same exact green, but from a tee located on a hill left of the current fairway. As collegiates, we used to play that fine one-shotter closest-to-the-pin style, for shots…

• Way back when, there wasn’t a single home anywhere on the property, whereas now the townhouses are legion. Ditto for the road which connected the course and Route 99 in Cromwell. What used to be farmland is now a massive, upscale, golf-driven subdivision.

• The 16th green at River Highlands accepts tee shots from across a lake. At Edgewood, the same putting surface received downhill approach shots from a hilltop tee — it was also a par-3, playing to the same green but from the opposite direction. Weird.

• The old par-4 3rd at Edgewood exists unchanged at River Highlands — the only one to make the cut, so far as we could tell.

• Both nines at Edgewood closed with par-3s; today, both are defunct. Well sort of… The old 9th putting surface survives, but as the 9th green at the business end of a dogleg par-4.

• The driving range today at River Highlands used to be the par-4 10th hole at Edgewood, a funky, downhill, dogleg left. Big hitters (like our teammate Ted, better known as “da Lama”) could drive the green if they carried the old driving range, which was out of bounds back then. Today, that O.B. area is the 18th fairway and one of the best amphitheater finishing holes in all of golf.

I could go on and on, but what to make of all this change?

Edgewood had its charm. I had for a long time thought it was an Orrin Smith design but Tony Pioppi argues otherwise, persuasively enough for me. Whatever the case, River Highlands is clearly the more interesting golf course. Indeed, Stuart and I agreed over post-match libations that our memories of Edgewood were, in a strange way, fonder for its demise — and for its remaining elements, however peculiar.

So pay attention to the courses you play. When you next return, they might not be the same.

And when you’re tramping your way around the TPC at River Highlands during the Travelers sometime, keep your eyes peeled for people like Stuart or myself — a gallery member who appears to be staring away from the action and into the living room of some townhouse. He may be a Wesleyan alum attempting to recall matches past… Or maybe, having caddied at Edgewood in the 1950s, he’s wistfully searching for that tree under which he shaded himself on hot August afternoons…

Or maybe he really IS staring into someone’s bedroom… In that case, call security.