Jack Nicklaus, the architect, really likes to test a golfer’s ability to hit pinpoint approach shots and this is certainty evident at the Grand Cypress Resort in Orlando, FL, which features 45 challenging holes he designed. 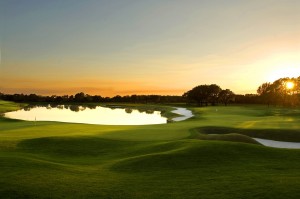 I found this to be true when I played the original 18 holes, now called North and South 9s, back in the mid 1980s. It seemed the only way to hit the greens in regulation was to hit an accurate high fade, something I could do a little better back when I was in my 40s.

Fast forwarding to 2013, I hit only two greens in regulation in posting a 90, playing the white tees at 6,000 yards, after Nicklaus added some undulations to the small plateau greens perched above sand or water in 2007 and 2008. He also changed a few holes, adding some length.

Nicklaus provides plenty of room off the tees. My only problem were drives on the closing long par-4s on each side, playing besides a big lake. I hit my two worst drives of the day, making it impossible to have a chance to reach the double green, even with 3-woods.

Visitors to the resort after Labor Day 2013 will find even more changes as Nicklaus is adding three new holes—a long dogleg left around water on the seventh of the North and a pair of short par 3s on both No. 8 holes—replacing a pair that featured a double green.

Further proof of the difficulty is that the North-South sports a course rating of 75.9 and a slope of 142 from the gold tees at more than 7,100 yards—no place for most visitors. They will find it still enough of a challenge from one of the other tees.

Allowing golfers a little different challenge is the shorter, sportier East 9 that has fewer bunkers and allows run up shots except for the par-3 fifth with its island green. When mixed with the more difficult North, the rating is 74.8 and with the South it is 74.7. 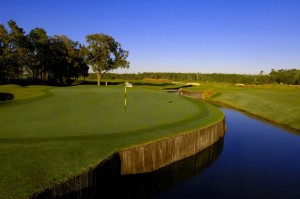 The New Course is Nicklaus’ tribute to the Old Course at St. Andrews, the home of golf. It features replicas of Nos. 1 and 18 at the Scotland links course and the 17th road hole, except that the dangerous bunker is on the right side of the green instead of the left. Just like in Scotland, the road and wall behind the 17th green are integral parts of the course and no relief is given. Seven huge double greens are also reminiscent of St. Andrews. Adding to the challenge, just like across the pond, are 150 bunkers, some the size of hot tubs, others as deep as 12 feet with wooden ladders.

Director of golf Joe Angelino noted his counterpart at St. Andrews told him that he felt Nicklaus captured the true feeling of the home of golf with his design. He added that one European writer’s first word when seeing the No. 1 and 18 replicas was “wow.”

The Villas of Grand Cypress, featuring 146 rooms, are in the process of being renovated by new owners and are within walking distance of the golf courses. In addition, the Hyatt Regency Grand Cypress offers 850 rooms and suites within a few minutes.