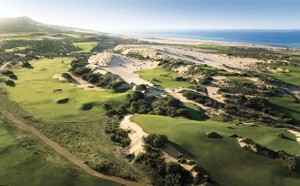 Build it and they will come.” That’s what the Kevin Costner character in the movie, “Field of Dreams” was told about building the baseball field in the middle of his cornfield. He did as asked and some of the greats of the game showed up along with his dad in the film.

Well, it’s also exactly what land developers have done in Los Cabos at the tip of the Mexico territory of Baja California Sur. On what once was an arid wasteland favored as a place to stay by fishermen in search of  trophy marlin, there are 11 golf courses––plus more on the drawing board––and plenty of deluxe accommodations to whet the appetites of discerning golfers.

The latest addition is Diamante Dunes at Cabo San Lucas where Davis Love III and brother Mark found landscape that allowed them to design a links layout that even the editors of “True Links” will have to consider adding to their short list. It has the sea views since it is located on the Pacific side of Los Cabos—the other courses are on the Sea of Cortez. It has part 2 of the links description with dunes and fast-running fairways. There’s wind, the third part of the equation. .As one golfer described, “It reminds me of St. Andrews, but is a lot warmer.” One unique feature is the practice facility with four separate hitting bays separated by large stone walls. My nephew Rob Phillips and a group from Texas seemed in agreement that the Dunes should be at the top of any must play list after not settling for just one round, but going back for a second round the next day.

The metamorphosis in Los Cabos started in the early 1990s when the developers realized that the scenic coastline with views of both the Sea of Cortez and the Pacific Ocean coupled with 350+ days of sunshine represented a vein of gold just waiting to be mined. By moving a lot of dirt on the desert and mountainside, adding some man–make irrigation lakes and finding enough water by building their own desalinization plants, they created some championship courses that combined ocean, desert and mountain characteristics. Add luxury accommodations and home sites and a new destination was created for golfers.

These developers––most of the original ones are no longer involved––spared no expense either when it came time to obtain architects. Jack Nicklaus’ signature is currently on five of them––Palmilla Golf Resort, Cabo del Sol’s Ocean, Eldorado Golf and Beach Club, Club Campestre San Jose and Puerto Los Cabos. Robert Trent Jones Jr. came in to finish up Cabo Real Golf Club. Tom Fazio created a masterpiece at the Club at Querencia and then Tom Weiskopf did the second course at Cabo del Sol, the Desert.

Nicklaus’ first design was the Arroyo and Mountain nines at Palmilla on the mountain side of the ultra–modern highway between the sleepy Mexican town of San Jose and the party–hearty Cabo San Lucas where the first marina is located. He routed holes around long waste bunkers, ponds and deep arroyos to create a target style of golf similar to Arizona. The difference? The views of the Sea of Cortez. Later, a third nine, the Ocean, was added with one hole playing down a canyon to the water’s edge where the luxurious One&Only Palmilla Resort, voted the No. 1 golf resort in Latin America, is located.

Given some land a lot closer to the water, Nicklaus’ second design was the Ocean Course at Cabo del Sol While others may not entirely agree; Nicklaus called the final three holes the best finishing stretch in all of golf. The par 4 No. 16 plays down to a green that was moved even closer to the ocean. The par 3 No. 17 plays from an elevated tee built atop a decomposed granite cliff over a sandy beach and rock outcropping. Just like No. 18 at Pebble Beach, the finishing hole borders the water, but Nicklaus did provide a 35–yard area left of that green for the golfers not wanting to risk hitting a ball onto the beach. It’s deserving of its No. 1 ranking in Mexico; so put it at the top of your “must play” list.

The newer Desert Course provides more target–style golf, including shots over canyon–like arroyos, as it climbs the mountainside on the other side of the highway. Vistas of the sea are visible from every hole. The 18th is another great finishing hole, calling for an accurate approach shot over a lake. As usual for Weiskopf, there’s a drivable par 4 on No. 7.

Nicklaus also did Eldorado, one of the luxury golf communities operated by the Discovery Land Company. Six holes of his original design near the water were eliminated in favor of high–priced home lots and new holes were built higher up on the hillside. It’s now an exclusive private club for members and their guests,

but worthy of trying to get an invitation.

Definitely put Cabo Real on your schedule. It plays uphill until you reach the No. 6 tee at 450 feet and then drops to the water’s edge for the greens on the par 4 No. 14 and the par 3 No. 15. The par 3 No. 12 offers a tee shot from a mesa 150 feet above the green with spectacular views of the sea. The par 4 No. 9 features a large double green (50 by 125 yards) guarded by water that will also be used when a new 9 holes is added.

The Club at Querencia, featuring a spectacular 26,000 square-foot Tuscan-themed clubhouse that includes state-of-the-art spas for both men and women, was the first private club and worth trying to wrangle an invite from one of the members who paid $150,000. While the Fazio-designed course that sits on a cliff with spectacular views of the sea can only be stretched to 7,050 yards from the tips, the roller-coaster terrain with

few even lies and the lighting fast (11 on the stimpmeter is the norm) and undulating greens make it a challenging test.

Club Campestre, nestled in the foothills of the Sierras, on the new road to the airport opened two years ago and should definitely be on your schedule if you have not had a chance to play it. The fairways are wide, but spray the ball a little and you are in the desert. It’s the greens where the course shows its teeth. It was the first course to use Paspalum grass, more tolerant to salt water, and the turf has matured very well to provide an idea playing surface. One of the most interesting holes is the double dogleg par 5 No. 7 where even the longer hitter may have to back off going for the peninsula green with their second shots.

Puerto Los Cabos, which features a unique hybrid with 9 holes from the Marina Course (holes carry names of marinas) by Nicklaus and the other 9 holes from the Mission Course (holes named after missions) by Greg Norman is also now open. Most golfers can readily tell the differences in design philosophies. Two golfers that I talked to actually preferred the Norman 9 since they felt Nicklaus created a couple of

long carries that tended to be a little unfair. Each of the nines has a par 5 that plays more than 600 yards, making one or the other the longest in Los Cabos depending upon where the back tees are placed on a particular day. One neat thing for visiting golfers is that all drinks on the golf course are included in the green fees. The owner

indicated it might be as much as two years before the other 9s are completed.

All of these golf courses can be pricey with green fees between $150 and $250 in the high season—rates drop in the summer when temperatures climb–but there are less expensive options at Cabo San Lucas Country Club near Cabo San Lucas and the Mayan Palace Golf Course near San Jose. The latter is probably better suited

for beginners, but does now have a second set of tees for those wanting to play 18 holes. There’s a 9-hole Indian Head Putting Course at the Playa Grande Hotel in Cabo San Lucas not far from the marina.. An hour’s drive north of the airport is a 9-hole par 3 at the Hotel Palamas de Cortez.

The economy has slowed down the continued growth of golf courses on the tip of Baja, but there is still a sense of untapped potential. Stillare a pair of Fazio  being considered are designs at Chileno Bay between Cabo Real and Cabo del Sol, a Phil Mickelson design at Diamante, a pair of Nicklaus designs at Quivira Los Cabos, and another Nicklaus creation at Cabo Pacificia.