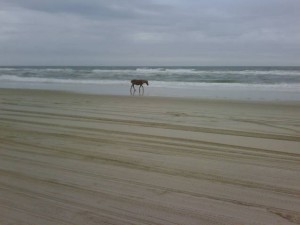 Wild mustang checks out the beach in Outer Banks, NC.

With mid-October back-to-back trips planned to two great locales, the Outer Banks of North Carolina and Big Pine Key, home of the tiny Key deer in the magnificent Lower Keys of Florida, I planned about 10 days worth of superb golf, fishing, sunshine and sport.  Michigan’s summer often comes to an abrupt close and eeking out a ‘last-hurrah’ trip before harsh north winds blow seems to stretch the summer out a skosh longer.

The Outer Banks, land formations spread out across North Carolina’s coast, offer spectacular scenery and very enjoyable golf.  An itinerary featuring Kilmarlic, The Pointe Golf Club, Currituck Club, and the Carolina Club was on the menu;  Nags Head Golf Club, was too but with a number of holes bordering Currituck Sound, the wrath of Hurricane Irene took its toll by blowing damaging salt water up and onto fairways and greens; only 9 inland holes were open.  But that storm was long past except for clean-up, mosquitoes, and annoying bugs left behind.

Advance looks at the weather were not promising, but those weather guys are never right, are they?  With rain chances pegged at 60-70% each day, rain gear was in the golf bag.  When playing golf in the Outer Banks, weather can be hit or miss depending on which side of Currituck Sound you may be on.  In this case, our hosts correctly guessed which course to play when and we bypassed rain all around us save for a few sprinkles.  Skies were gray and courses were damp, but at least we dodged the brunt of it.  Probably the worst weather hit when we visited the wild mustangs (the horses, not the cars) on the beach, courtesy of County Commissioner Butch Petrey, who managed to get us up close and personal in his four-wheel drive SUV.   The rain and wind never bothered these magnificent creatures, especially this one who was more than happy to pose against the roiling surf.

But no matter the soggy skies, the bright, sunny, and glorious Keys were up next for 7 days of lobstering, stone-crabbing, and deep-sea dolphin (mahi-mahi, not Flipper) fishing.   The Keys always provide ample opportunity for sunburns or tanning out in the elements.

Wrong again.  Arriving last Thursday night via a kitschy 10-person Cape Air plane complete with multi-colored shark and Ernest Hemingway artwork, as I watched the sun set I had no idea that it would be the only sun  I’d see for the next week.  The next day, our group did get out into bumpy seas for my first ever dolphin bite and catch, but we came through a nasty storm returning to the dock.  A few hours later, the rains began to fall 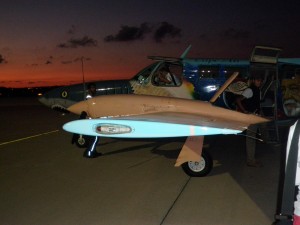 Last of the sunset....and the sun, headed for 5 days of torrential rain in Key West and Big Pine Key.

harder and did not let up on Saturday, Sunday, and Monday, dumping about 6 inches daily on Big Pine Key.  Plans to go to Key West were thwarted when many of those streets were flooded by even higher rain totals.  On Tuesday, the skies were again dark and dank, though we did make it out to a few lobster and stone crab spots for about two hours managing to just get back in when the thunder, lightning, and rain erupted again.  That night, tornado watches were out….tornadoes?  In the Keys?  The weather for Wednesday also looked awful – and was.  Raging storms woke me up about 5am and the weather map on TV was actually white with lightning strikes.  Forecasts for clearing skies did not appear until Thursday…….the day I began the drive home.  Here is what the National Weather Service had to say:

DURING THIS FIVE-DAY SPAN(Fri-Tue), SEVERAL ORGANIZED BANDS OF SHOWERS AND THUNDERSTORMS DEVELOPED ACROSS THE FLORIDA KEYS, OFTEN WITH STORM MOTIONS THAT INUNDATED THE SAME AREAS PERSISTENTLY FOR HOURS AT A TIME. THERE WERE ACCUMULATIONS TO OVER 20” IN PORTIONS OF THE LOWER KEYS. KEY WEST AIRPORT RECORDED 6.91 INCHES OF RAINFALL ON OCTOBER 17TH, WHICH STOOD SINCE 1910. THIS WAS THE 5th WETTEST 5-DAY RAINFALL SINCE RECORDS BEGAN IN 1871 AND THE WETTEST 5-DAY PERIOD SINCE JANUARY 1983.

Thanks Cuba…..paybacks are no fun.

Sigh.  I would have never dreamed that out of 10 days in areas of normally abundant sunshine and warm temps that ol’ Mr. Sol would be a no-show, save for a few precious hours.  There are a couple of lessons to be learned here:  1) never take anything for granted and 2) just when you think things can’t get any worse…..they can.

Life throws a lot at you, just like golf.  A sure thing might not always be so sure.  Sometimes you have to be willing to wait for the good to come.  Every so often, it never comes and you need to move on with Plan B.  In this case, there was no Plan B, other than to head back to Michigan and dream of sunnier skies on the next adventure.  There was good news though:  the weekend in Michigan brought sunny skies and temps in the mid- 60’s.  I caught a few rays and people remarked on how tan I got on my ‘vacation’.   Who knew I’d have to arrive back in the Winter Wonderland to actually bask in the sun?