The 2012 U.S. Senior Open heads to balmy Michigan this week where temps have hovered in the mid-90’s……not at all like the cooler climates of British Isles courses after which the links-style Indianwood Golf and Country Club is modeled.  Owner Stan Aldridge rescued the downtrodden club in the early 80’s and cast his love for all things anglophile throughout the clubhouse and grounds.  Since then, the original Wilfred Reid design has been tweaked a bit but has consistently been a favorite of golfers everywhere.  Aldridge clamored for – and received – two U.S. Women’s Opens in 1989 and 1994, several Michigan PGA events, and countless major charity fundraisers, including one with Arnold Palmer shortly after he took over.

And now comes the USGA’s U.S. Senior Open where our golf heroes of yesteryear will battle traditional heather, undulating topography, wind, and tricky greens that, if stimped beyond 12, will give the players fits.  As a member there for 5 years shortly after Stan worked his magic, I have played this course dozens of times and have seen every conceivable pin position.   There are places on those greens which are unforgivable whether you are above the hole….or simply on the wrong side.  The course, at 6872-yards, is not long by tour standards but a par of 70 and the penal nature of straying off the fairway or hitting miscalculated approach shots more than makes up for any lack of length.  Missing the shorter rough by even one foot can mean losing a ball.  With fairways scheduled to be about 30 yards wide, keeping it on the short grass may be a difficult task. 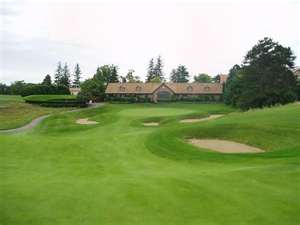 Indianwood's 9th hole, from a safe driving spot on the fairway.

Certain holes ought to make for interesting spectating:  360-yard number 9 is a 90-degree dogleg right and offers the ultimate risk-reward: play it safe with a straight 210-yard drive safely down the middle leaving a mild 150 yards to a downhill green; even then, overpower the drive by 15 or 20 yards, and the heather and gorse beyond the dogleg toward #10 will gobble up the ball.  Adventuresome players may attempt to drive the green.  However, a slight miss will find out of bounds right – along with the driving range and parking lot.   Evergreen trees growing from thick rough and heather on a 45-degree sloping hill protect the right side as well, so all of that has to be flown.  Bunkers guard the green, which is severely sloped from back to front and left to right.  If the pin is right front, anything above or left will be snake territory….or worse.  Hit it only a few yards too far and the grill room brick wall brings reality back….and perhaps the ball, quickly.

The 90-degree dogleg right 18th was shortened from a par-5 to par-4 some years back with several evergreen trees removed and replaced with mounds, moguls, heather, and bunkers right of the fairway.   At 460-yards, this healthy finishing hole will provide drama on both the tee shot and the mammoth putting green.  Players may be tempted to skirt the dogleg and fly the gnarly mess of rough.  Again, the choice is to plan your tee shot angle either left of the lone tree near the turn and be safer; borrow too much right with a less-than-solid drive and you may not even find the ball, let alone hit it.  The 18th green is one of the largest greens in Michigan, despite being downsized a while ago.  Elephant burial grounds and rolling surface changes work hard to prevent two putts.  Merely hitting the green is not good enough here and four putts are not uncommon.  With the clubhouse and grill room surrounding this bowl of a green, spectators may want to camp out for great views of fancy putting and fretting caddies as they attempt to read this green.

The fourth hole will also provide drama for spectators and headaches for players, who will face a menacing tee shot on the 90-degree dogleg over death and sand on the right.  A blind second shot to a bowl green with OB directly behind the hole will challenge.

No. 10, petite at 358 yards, still offers obstacles: a lake covers the entire left side along the driving area.  Borrow too much safety and moguls and heather on the right are bothersome as well.  This elevated green is extremely undulating and negotiating the pin placement will be especially crucial.

The par 3’s at Indianwood are strong: severe slopes surrounding the putting surfaces will force players to pay particular attention to pin placements.  The 17th, at 197 yards, is especially troublesome with major dropoffs left, toward a large bunker and the 18th hole teeing area, behind with trees and rough, and right to a cavernous bunker.  The green itself is divided into sections with a marked trough toward the right middle.  Some putts are near impossible to negotiate.  A back right pin position will be tough, especially when the winds kick up…and they will.  It is always windy at ‘Windianwood’.  Hole number 3 is short, at 160-yards, but a ball settling on the back of the green with a front pin placement will yield a devilish putt. Lucky 13 is all carry at 217 yards, though the green is large and not as protected as other par-3’s.

With only two par-5’s at holes 1 and 15, players will need to take advantage of those scoring opportunities while they can.  Both play west into prevailing winds and are reachable, though the 15th hole’s uphill approach will be the tougher one to hit.  Both greens are also guarded on the sides but do have front openings where shots might run up if it is dry; wet conditions will prevent any roll-up on the elevated green complexes.

Overall, this shotmaker’s course should prove to be an exciting event to watch with spectators afforded great views of many holes from several places on the property.  Ticket prices start at $20 for practices rounds, $40 for tournament rounds to $120 for grounds passes and parking all week.  Children under 17 are allowed in free when accompanied by a ticketed adult.  Military personnel, active or retired, will be admitted free with Military ID on Wednesday, July 11.  More information is available at www.2012ussenioropen.com.