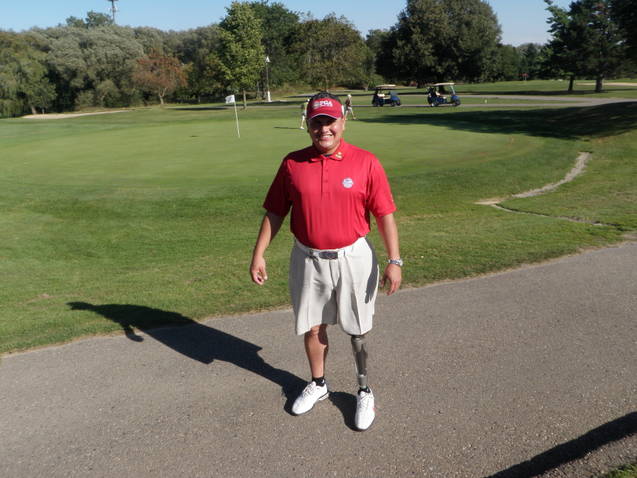 Today marks the official celebration of Veterans Day, though the real day was yesterday.  My dad, Buck,was a proud veteran and lived to tell stories about the war.  A tough drill sergeant in the Army stationed at Fort Ord in California, he also learned to play golf during WW II, prior to being shipped to the Phillippines.  He was taught first-hand by Aussie golf professional Jim Ferrier, who took him to Pebble Beach, Spyglass Hill, Pasatiempo, and yes, even Cypress Point, where soldiers were allowed to play for free back then.  Dad became a +2 handicap quickly and instead of taking a job as a golf pro upon his return in the 1950’s – when many golf professionals were required to come into the clubs via the back door –  instead he opted to become a Detroit Firefighter and used his 24-hour-on/24-hour-off schedule to spend time with us kids and teach us the game too.  We kids, in turn, have always embraced golf and respected the military.  Here in this space, I have written about many military events – including Folds of Honor – and that is why you shouldn’t miss this:  for the second consecutive year, The Golf Channel will air an hour-long feature during Veterans Day week on The Patriot Cup, a golf event benefiting families of our nation’s fallen and disabled service members. The Patriot Cup presented by Budweiser and the Folds of Honor Foundation premiers on Monday, Nov. 12, at 9 p.m. EST.

Taped over Memorial Day Weekend at The Patriot golf course in Owasso, Okla., The Patriot Cup paired top PGA TOUR players, Champions Tour players and celebrities with members of the military in a Ryder Cup-style match pitting ‘Dad’s’ Army, Navy and Marines versus the Air Force.  Now why the Navy didn’t sneak in and team with the Fly Boys of the Air Force is a mystery…..considering Navy pilots rip up the skies in those beautiful and sleek F-18 Hornets.

The hour-long special is hosted by Rich Lerner, along with on-course commentary by quirky and unpredictable David Feherty, and will combine event footage of golfers including Tom Lehman, Gary Woodland, Rickie Fowler, Corey Pavin, and Peter Jacobsen with feature stories from Folds of Honor scholarship recipients.

Folds of Honor Foundation provides scholarship money for the daughters and sons of military heroes who have either been wounded or killed in action.  Major Dan Rooney helped to establish the Foundation after a heart-wrenching experience as he escorted the body of a fallen comrade, Corporal Brock Bucklin, back home to Michigan.

“The Patriot Cup is a true celebration of God, country and the game of golf,” said Major Rooney. “It is amazing to see how the greatest golfers in the world and celebrities like Vince Gill, Rascal Flatts and Craig T. Nelson are so appreciative of the opportunity to give back to the families who have given so much. We look forward to sharing these stories with viewers of Golf Channel throughout Veterans Day week.”

Major Rooney is also a PGA Professional whose family owns the Grand Haven Golf Club in Michigan, where back in 2009, I chaired a small retirement golf outing for NRD-Michigan outgoing Navy Commander Leornard Borgdorff.  Coupled with the golf event, we elected to hold a fund raiser for the Folds of Honor, which the Golf Association of Michigan also supported through a Hole-in-One contest.  Through the generosity of the course, other sponsors, and military personnel we raised over $2,000.

Many other companies and organizations are stepping up to the challenge of welcoming soldiers back into the fold:  recently, Golf Digest Ireland sponsored several wounded war veterans, including Major Ed Pulido, on a 10-day trip to Ireland where the country’s people opened their doors and their arms to these brave soldiers.  Adaptive Golf programs, which train amputees and those suffering from other debilitating conditions through use of special equipment and techniques, were taught to facilitate the veterans’ entry back into the game of golf.

If you miss the broadcast tonight, here is the complete Golf Channel schedule for The Patriot Cup broadcast during Veterans Day week:

Supported  by Budweiser and HNS Sports Group, The Patriot Cup broadcast was produced by Back 9 Productions, a leader in golf television production.