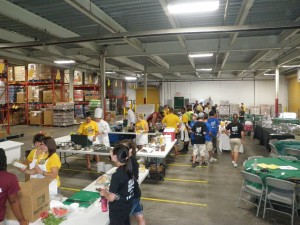 Tens of thousands of people in Metro Detroit are now receiving food pantry staples due to tough economic times.  Much of this food goes to waste because people do not know how to create tasty and healthy meals from basic provisions.  For young men and women ages 17-19 trying to enlist in the military, over 80% are rejected, mostly because they cannot pass the fitness test.  CHEF AHOY was created to bring attention to this very serious problem which affects not only the military but the very foundation of our country as health care costs continue to rise.  Nutrition will play an increasingly important role in keeping the U.S. strong.

Top area chefs will lead teams made up of Navy Culinary Specialists (CS), veterans, community leaders, media, and youth members.  Together they’ll combine pantry basics from fresh and organic produce and herbs from two local farms, RC Organic Farm and Haven, and ‘Mystery Ingredients’ culled from Navy history during the War of 1812.  Chef teams will have 3 to 4 hours to prepare tastings for celebrity judges and Skipper’s Table guests.  Recent ‘Biggest Loser’ contestant Buddy Shuh will make a special appearance at 1pm.  Participating restaurants and vendors will feature food samples and other offerings.  Come join in the fun:

All access plus : Taste the chefs’ creations in family style seating; you sample what the judges do!