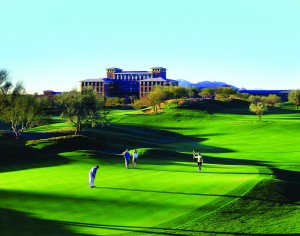 The Scott Miller-designed Westin Kierland Golf Club with the resort in the background.

In the heart of “new” Scottsdale is  The Westin Kierland Resort & Spa.  It’s a luxurious resort with a world-class, full-service Agave Spa. With 732 rooms, the resort’s architecture uses materials and colors meant to mirror Arizona’s Grand Canyon.  Each room is outfitted with the deep-sleep inducing Heavenly Bed®.  Its 27 golf holes, designed by the estimable Scott Miller, offers wide fairways and well-protected greens that make for fun rounds, the essence of resort golf.  It’s also a place where management isn’t afraid to unleash and support employee enterprise, and experiment with different ways to entertain and meet the needs of guests.

At one of the property’s ten restaurants, the walls are covered by the art of Cuban-born Nelson Garcia-Miranda, a former deseo dishwasher who is now an artist in residence, painting in the restaurant’s lobby during happy hour, five nights a week.  It recently hired PGA professional David Fisher away from a private club in California as its “golf concierge,” a position that never before existed.  “My role is to meet and help golfers from the moment they arrive until they tee off, whether it’s to get them a bottle of water, a sandwich or sun block,” explains Fisher.  “I often go to the range and ask if I can get them anything.  Eight-out-of-ten times the answer is, ‘A new swing.’  And right there I can help with a few simple tips that will help them during their round of golf.”

At the Agave Spa, Fitness Director Steve Heller has developed a FORE-MAX training program, that helps increase flexibility, functional golf strength and aerobic conditioning.  It’s available to guests and local residents, but is designed to be incorporated with other services at Kierland.  There is, in fact, a satellite Cool Clubs facility here, so that clients can get their swing speeds measured before and after a series of FORE-MAX workouts.  “A five mile-per-hour improvement is pretty usual,” says Heller, “and we often see an increase of ten.” 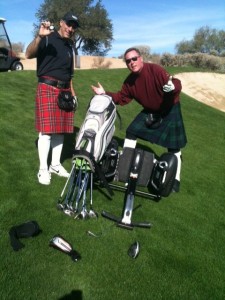 The golf program is managed by Troon Golf and also features wrinkles not found at many – – or any – – other courses.  One is the daring use of Segways that can carry a single golf bag.  Players can drive directly to their ball, which speeds up play.  Learning to drive a bag-laden Segway, however, is a challenge of a different sort. Indeed, on our first hole of play, Jeff Wallach thought he’d stopped his Segway, only the “leader in green personal transportation” kept going on its own, jumping a curb, tipping over and driving itself down a grass slope, busting off the head of a rental driver and leaving a trail of tees, glove gloves and other accident detritus.

Another wrinkle here is the “Scottish Golf Experience,” in which players can wear rented kilts, sporrans, belts and socks.  (The kilt is surprisingly comfortable and no, we didn’t go commando.)  The idea is to time the round so that golfers come to the last hole near sunset.  That’s when Michael McClanathan plays the bagpipes – – as he has nightly for nearly a decade – – next to the lake by the resort’s patio.  There, the kilt-clad golfers can listen to him play while sipping several varieties of Johnnie Walker Scotch, and if so inclined smoke a cigar.

Dressed in our Scottish gear, Wallach and I were joined by Kierland’s Director of Golf Kipp Bates, who guided us around the course and relayed many of the back-stories around the resort’s innovations, and the region’s history.  “At first the Scottish themed activities might seem out of place,” he told us, “but there were many Scottish immigrants who came here during the early days of Phoenix and Scottsdale, who helped to build railroads and other developments.   This part of Arizona has a strong Scottish influence.”