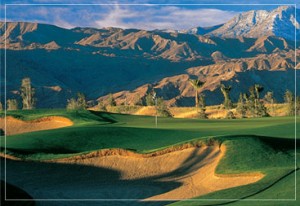 The dramatic bunkering at Shadow Ridge.

The Palm Springs Golf Road Warrior’s Friday started not long after dawn, with the links portion of the day ending on a nearly pitch black 18th green, illuminated only by the light of a crescent moon.  For the first of two rounds, we were treated to Shadow Ridge, one of the best designs from six-time major championship winner and the all-time Ryder Cup point scorer, Sir Nick Faldo.  It is also home to the spacious Faldo Golf Institute.

So, with arrangements made by the Greater Palm Springs Convention and Visitors Authority we headed out in our sponsored AUR shirts that were packed in our TravelPro Luggage, Callaway Clubs, Diablo Golf balls, and with real time match scorekeeping provided by Grow The Game Golf.  On a day scheduled for 36 holes in heat that exceeded 90 degrees – – in late February – – we needed that sponsorship support.  But back to Shadow Ridge . . .

Set against the stunning backdrop of the snow-capped Santa Rosa Mountains, the course was inspired by the great sand belt courses of Australia, says Faldo, whose name is on the restaurant, locked room and just about everything else here.

“Our fairways are typically generous but our bunkering style is impressively bold. The greens have plenty of subtle undulations and they reward and encourage a variety of approach shots.”

The bunkers were indeed dramatic – – and menacing.  Strawn plugged a ball in one – – see photo – – and had to puzzle his way out.  Several of the greens had false 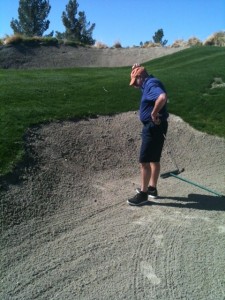 Strawn wasn't happy that his bullet down the fairway plugged in a bunker faace, but he did hack his way out in one.

fronts that couldn’t be seen from the fairway, treacherous slopes that on at least two holes fed pin-high shots into catchment areas.  Next time around we’d play it better.

While we were given awfully good treatment, the visit to Shadow Ridge was what golfer travelers should expect.  We were greeted by Director of Golf Brett Meabon and Head Golf Professional Colin Gooch, who introduced themselves and offered any kind of assistance we’d need. The starter knew we were journalists and asked where our stories would appear, where we’d been and where we were going next.  The Golf Road Warrior sign on our two carts – – special made, since we weren’t part of a tournament – – was a kindly touch.

It was a marked contrast to the previous day, when a skeptical woman at the counter didn’t have our reservation, claimed we were out of luck, and seemed to imply we were some kind of grifters looking to skim four tee times.  The indifferent head pro came to straighten things out, and admitted they’d made a mistake booking us the previous day.  We got out, but he didn’t bother to say hello or introduce himself.

I get that people have bad days and job pressures, even in the hospitality industry.  And it’s not that journalists are particularly special or deserve squat.  But if the management and staff treated us with suspicion and indifference, how are they treating customers paying $180 for a round? 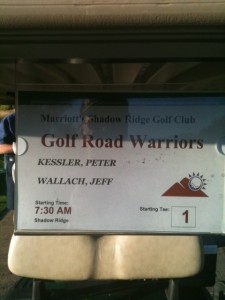 In any event, the contrast with Shadow Ridge was sharp and vast.   And we think Wallach likes his new Callaway sticks, including the Razr irons and Razr Fit Driver, which he was just killing.  We also think Wallach is sleeping with his Odyssey putter tonight, after rolling in a 30-footer on the 18th at Shadow Ridge for a cool 79.