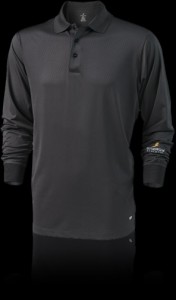 While the boys at MythBusters might be able to prove that my drives weren’t getting a few extra yards thanks to my new, long-sleeved Energy Athletic golf shirt – – which feature the brand’s proprietary IonX Ionized Energy Fabric™ – – I did pop a few suspiciously long tee shots last week. Maybe it was the placebo effect of the yellow symbolic lightning bolts on the collar and the cuff, or perhaps a trailing wind.  Then again, it could have been the negative charged ions in the fabric.

Most of the players on the World Series Champion San Francisco Giants, after all, wear necklaces and other gear that’s also ionized, as do plenty of golfers.

“By using science validated by Tour stars and other elite athletes and applying that to a revolutionary fabric, we’re helping players truly maximize their power on the golf course,” says Mike Abram, President of Performance Sports Brands, parent company of Energy Athletic Golf.

The company contends that its apparel’s ability to increase power was confirmed by an independent university in a double-blind study of 12 rugby players, who wore shirts with negative ions embedded into the fabric. The results showed a measurable increase in average power during repetitive, short duration, high intensity exercise, similar in some ways to playing golf.

A Bit About Those Ions

We are, in fact, surrounded by both positive and negative charged irons, the respective density of which is influenced by environmental factors.  It’s well known that an excess of positive ions can cause headaches, trigger allergies and other ill effects.  Positive ions can build up indoors where it is dusty and televisions and computers are operating; where heating ducts strip the air of electrons, churning an increase of positive ions; and, anywhere dry and warm wind blows.

Called “the vitamins in the air,” negative ions spike after a drenching rain, and near the ocean, rivers and especially at the bottom of waterfalls, which is why visits to these spots feel refreshing.  Negative ions have been shown to lift mood, lighten depression and help with seasonal affective disorder.  But it’s the environment that primarily drives the levels.

Still A Fine And Comfortable Shirt

My golf buddies and I had a good laugh at the bolts, for it harkens back to that great Volkswagon Jetta commercial, where a young kid asks an older teenager selling a small motorbike, “Is it fast?  Says the seller:  “It’s got a lightning bolt on it, doesn’t it?”

But with Energy Athletic, there’s no way you’re getting taken by an over-promising shirt.  Made of 95 percent polyester and 5 percent Spandex, the lightweight, breathable and moisture-wicking shirt has a great feel, soft and comfortable. It’s a casual polo that I’d wear most anyplace during the winter.  As a bonus, it doesn’t have a tail so it can look good whether it’s tucked into one’s pants or not.  However, it you don’t like the shirt, send it back within 30 days and you’ll get a full refund.