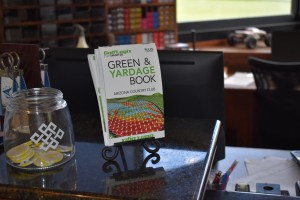 Coming to a pro shop near you: The GolfLogix Green Book.

For a company that introduced golf’s first handheld GPS distance measuring device way back in 1999, and a decade later one of the first smartphone apps that used the GPS to literally duplicate the course on-screen, Golflogix is now riding one of the most old school products to hit the game’s mainstream since Old Tom fastened his kilt.  Released last April, the Green Book is a four-and-a-half by seven-inch paper green-reading guide, with arrows and colors that illustrate the slopes and severity on putting surfaces down to the centimeter.

It fits in a back pocket – – of any golfer.  And eventually, there will be a version for any golf course for which a player wants one.

Less expensive than most green fees, Green Books are currently available for roughly 4,500 courses in the United States, but if ordered could be quickly made for almost every one of the 14,000 courses in the country.  Rules compliant, the Book is pretty much identical to the guides used by Tour professionals, their caddies and athletes in well-funded collegiate golf programs.

Flipped open, the Green’s bottom page is essentially a yardage guide for the entire hole, which can help players with club selection.  The top page has two 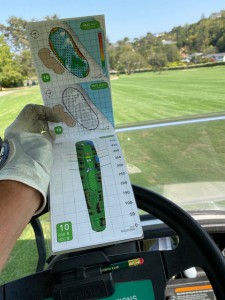 The guidebook is useful from tee to green.

illustrations of the green.  One is a quick view “heat map,” which used color codes that show that hot and cold areas of green undulations, essentially the percentages of the slopes, revealing a desired landing area depending on pin placement.  The other shows a set of arrows – – which point downhill – – that show the direction of the break within five-yard grids, with each line representing three inches of elevation change.

What was once an exclusive, rather secretive and expensive tool for golf’s elite can now be in the hands of ordinary players, enabling the golfers to quickly read the break and speed on any putt, without grinding time looking at it from all directions.

The magnitude of the success of the Green Books has actually surprised GolfLogix President and co-founder Pete Charleston.  “When we first put this together the great unknown was whether golfers would purchase one book for their home course, maybe a second for a tournament venue, and be done with us,” he explains.  “But last month, 23 percent of our sales were re-orders from prior customers, which is huge and suggests this might be more to this than we suspected.”

Far more detailed than yardage books sold at most golf courses, the Green Books have been aggressively marketed.  Golflogix has been sending three free books to PGA members who can test them for themselves, or loan them to members who have difficulty in reading greens.  The company is also emphasizing the book’s potential for tournaments and member-guest events, where half the field isn’t familiar with a track that’s usually slicked up for competitions. In July alone, the number of courses stocking the Green Books grew by 300 percent.

(When printed for specific courses, the Club’s logo is often included and the covers are laminated with plastic, making the books more durable.) 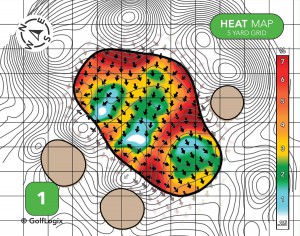 A typical heat map showing the steeper slopes and flat spots on a green.

A great deal of high technology went into a product that appears about as low tech as a golf scorecard.  But unlike the GPS-based products developed by the Scottsdale, Arizona-based company, satellites are not used to generate Green Books.  “All of the data is gathered from airplanes and drones, because the technology just doesn’t work from space,” explains Charleston, data that must include radio signal returns that reveal the variations in a green’s terrain.  “We obviously have a large and proprietary computer program to process the information.  It’s based on a crazy amount of data, about two million points per green.”

At my home course, which I’ve played for 16 years, the Green book’s arrows and colors are remarkably accurate.  (While I already know the breaks and speeds, putts almost never go where I want, a tragic affliction that book-learnin’ will never cure.)  But my head pro has loaned copies to several of the club’s better players who can putt, but had difficulty reading greens, and they have found the book instantly helpful.

“Reading greens has always been one of my problems,” admit Charleston.  “I just can’t see subtle breaks and I know there are lots of players just like me.  Now that I’m used to the book, I can see the break even as I’m walking onto the green.  It really gives me a sense of confidence on those five to six times a round when your eyes just can’t figure the break.”

However, hackers who behave like Tour professionals is what worries head pros , who fear any impact on pace of play.  Charleston believes that the Book can speed time on the green.  “You eliminate all the fellows trying to plumb bob the hole from several directions.  It’s like having a caddie.”

GolfLogix has a phone app for Green Books, but carrying a cell phone to the green simply isn’t much fun.  The tactile nature of whipping a greens book from your back pocket is what can make one feel like a Tour pro, at least for a retro chic moment.

As it has with its GPS units and golf apps, Golflogix keeps products up to date, despite remodels, weather events and other course changed, largely thanks to its army of five million product owners.  I’ve reported a couple inaccuracies on the app and saw it fixed within 48 hours.  “We rely on customers for that kind of feedback,” says Charleston.

Green Books for an 18-hole course are currently retailing for $40 direct from GolfLogix, and $30 for a 9-holer.  Clubs may retail them for considerably less as a service to members.  A list of the courses currently available can be found at this site.  For more information, go the GolfLogix site.