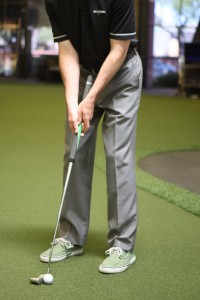 Long, but not quite like a belly putter, the Boccieri EL Series imparts the same balanced feel as an anchored stroke.

When golf’s governing bodies first proposed a ban on anchored strokes, essentially abolishing the use of long putters, I figured that – – at worst – – my trusty Odyssey Sabertooth would be legal and effective until the last minute of 2015.  I also believed that Adam Scott, Tim Clark and common sense would prevail over a lame attempt to exert authority. What a woeful underestimate of USGA and R&A power.

Within a week of the announcement last May that Rule 14-1b would be instituted on January 1, 2016, my lag putts that routinely nudged to kick-in distance began stopping eight feet short. Three-foot putts rolled ten. Tap-ins lipped out. It was plainly evident that the Blue Coats don’t just issue rules, but impose Serious Golf-God Hoodoo on those who doubt their actions.

While the suddenly ineffective putting may have been a mere psychological response, a new putter that functioned like the old one, but didn’t require anchoring, was inevitably needed.  Several manufacturers quickly responded to Rule 14-1b with innovative alternatives, including shafts that one could anchor or lock against one’s arm, which will remain legal. Those didn’t have much appeal.

However, when I first put my hands on a Boccieri Golf Heavy Putter Extended Length (EL) Series a mid-weight model, it felt exactly like my belly putter when it had functioned at its best, but enabled me to use a conventional stroke.

The truth is that most benefits of the belly putter are not so much from the anchoring – – which is one reason I opposed the need for the new rule – – but a weighty head and hefty shaft that facilitates a stable stroke. “One reason belly putters became so popular was because the additional grip and shaft materials created a natural back-weight,” explains Stephen Boccieri, President and CEO of Boccieri Golf. “Others are just now adopting counterweighting, while we’ve been touting it for nearly a decade and have now taken it to the next level.”

Boccieri specialized in making putters with relatively heavy heads, with the idea that the weight engages the body’s larger and more stable muscles during a relatively delicate stroke, while minimizing the use of the wrists.  Standard length putters are typically 34 to 35 inches, but the new Extended Length versions have some advantages for fans of belly models.  Available in 36, 38 and 40-inch shafts, the EL Series sticks are not too long to get jammed into the belly, which will be illegal in a couple of years.  Moreover, one’s hands naturally grasp the longer shaft a few inches down from top, just as with a long putter.

The extra length also allows Boccieri to equip these putters with a 17-inch grip, and a substantial 175 grams of counter-weight, which can increase the putter’s overall mass by more than 25 percent.  The feel of the higher balance point is palpable, making the sensation of the un-anchored stoke almost identical to that of using a belly model.

Feel is one thing; the technical aspect of the counterweighted putter is another.  The higher balance point on the shaft leads to a greater moment of inertia, the progenitor of more stability as the putter face strikes the ball.  In addition, the additional grip weight prevents the golfer’s hands from lagging behind the head.

“The head of your putter shouldn’t be the activator that hits the ball,” said Boccieri in a recent Golf Digest piece.  “You want your hands to lead at impact.  A lighter grip or a heavier head lowers the balance point of a putter, making it harder to stop the head from getting ahead of the hands.”  It also helps override the fast-twitch muscles in the wrist, which are live-wired to the brain and feed the yips.  Quieter wrists equal a more stable stroke.

Of course, a heavy putter is no guarantee of making more five-footers, since lining up correctly and reading the speed and break on the green is as important, if not more so, than a perfectly executed putting stroke.  But these variables are what make a putter the most individualistic equipment choice a golfer can make.  Different looks appeal to different eyes, and these particular clubs are the most visually and physically disparate that can be found from bag to bag.

While different models fit the eye and hands of individual golfers, all EL Series putters have the same counter-weighting.

Because of such catholic preferences, Boccieri makes the EL Series in 28 different models including blade and mallet options, three different finishes and three distinct weight categories. The LITE is 840 grams, the MID is 865 and the HEAVY is a stout 930 grams.

The new style of putter is winning instant fans. For example, just a few days after Marin Country Club Assistant Pro Dave Wolert acquired a TaylorMade Daddy Long Legs model with a 38-inch shaft, club-member Joel Jutovsky asked if he could borrow it.  Suffering for 18 months with the full-blown yips, Jutovsky tried numerous putters and more grips than an office-seeking politician.  But with the counter-weighted TaylorMade on the putting green, he began stroking the ball with a smooth pendulum motion.  After 18 holes, Jutovsky insisted that Wolert sell him the club – – Wolert’s club, because he didn’t want to wait a few days for an order.

“There was no adjustment period whatsoever,” says Jutovsky.  “And after all those months when I knew I could not make a three-footer, the yips are gone.  What a difference this technology has made.”

It also didn’t take me long to readjust to a conventional stroke with the 38-inch EL mid-weight.  (I’ve been using a belly putter for about 18 months.)  A few minutes on the practice green were all that was needed to dial in the feel.  And on the course, lags are once again stopping at kick-in range, while three-footers are dropping with confidence. While I’m still convinced that Rule 14-1b is unnecessary – – and even discouraging to older players who have trouble bending over putts and struggle with the yips – – the Boccieri EL Series is a creative compromise that can keep players in the game well into 2016 and beyond.