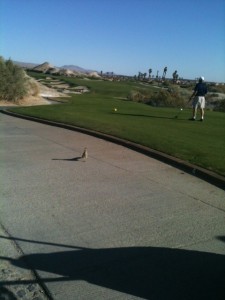 Today the Golf Road Warriors had a remarkable day on the Indian Wells Golf Resort’s Player’s Course.  Joined by a couple of colleagues from the Palm Springs Convention and Visitors Authority and one of the young professionals from Indian Wells, we went out in two carts.  As is custom, we headed out in our sponsored AUR shirts that were packed in our TravelPro Luggage, Callaway Clubs, Hex Black Golf balls, and with real time match scorekeeping provided by Grow The Game Golf.  Today these aren’t just wanton plugs, because some of the stuff made a real difference in how the day unfolded.

Yesterday I wore one of my regular golf shirts and nearly melted in the day’s heat.  Today I went with the AUR Active Dri-Max, which is a Polyester double knit that has the stretch of spandex and a soft and supple feel.  It has a lightweight drape that makes it perfect for golf.  And its crease resistant fabric dries quick, an important attribute on a day where perspiration is guaranteed.

While the Indian Wells course is a well-designed and maintained as any we’ve seen down here, wildlife have a way of sometimes upstaging golf in the Coachella Valley.  At Terra Lago yesterday, we were amazed by the biomass of bunnies, hundreds of which were darting in and out of bushes on most fairways.  There were baby rabbits, tiny vols and roadrunners, too.  See the photo of Kessler the Golf Road Runner, and then the real thing.

At Indian Wells we saw several thousand birds, looking like geese, swarming in random formations several hundred feet above.  You’ve probably seen videos of swarming swallows in Europe.  But these larger birds were moving en-mass, cartwheeling in disparate directions.  We simply had to stop and watch and did not care if it made us three minutes behind pace.  Any golf who ignored them and focused only on the next shot is a doofus.

The Player's Course at Indian Wells.

I also filmed a video of the swarm.  Our trusty GRW page manager John Hartley will post it here if possible.

I kept score in our cart with the Grow the Game Golf on my smart-phone, and backed it up with this hip new app called paper – – just in case we lost our signal.  Wallach was in the foursome ahead.  Strawn was in mine.  These men hold wagers whenever they compete.  Consequently, Wallach and Strawn grind like Conan the Barbarian on the Wheel of Pain.

While today was no exception, this application is really designed for more than two players.  Say you have a club tournament with 50 players.  You can see in real time whether the birding you made on a par 4 stroke hole for a net eagle holds up all day.  It can also help a pro staff have results the second the tournament is over, without the time consuming chore of checking scorecards.

In any event, Strawn has been on a long and expensive losing streak and had the air of despair and desperation about him.  But his friends rallied.  He got a good putting trip from our professional host.  I loaned him a new TopStrike Technology belly putter that I’ve just started testing but which has not yet been released to the public.  I may have to wrestle him to the death to get it back, since he handles it like a magic wand.  Coming to the 18th green at Indian Wells, Strawn knew he needed to make a par to take the entire match from Wallach, front, back and the entire $15 – – thanks to the information on the app.  He left his birdie putt five feet short, then drained the winner.

The second I punched the score into the Grow the Game Golf phone app, we knew Wallach felt the ice pick in the kidney.