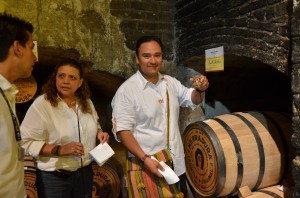 As Interstate 10 slices through San Antonio it is flanked by neon walls of ubiquitous chain-brand emporiums, all too many of which specialize in high-caloric fast feeding.   The Alamo city, however, also has its share of fine restaurants, with cuisine to delight the fussiest foodie.  This was most evident at a recent dinner sponsored by the San Antonio Convention & Visitor’s Bureau, where authentic “street foods” from Mexico’s coastal towns and interior villages were paired with a series of premium tequilas.

Just as different wines enhance certain foods, sipping smoky firewater with spicy entrees is – – at least to a professional-grade consumer of both – – an absolute delight.

The venue for the evening was Chef Johnny Hernandez’ La Gloria Ice House, which sits on the grounds of the historic Pearl Brewery and just off an extension of the city’s fabled Riverwalk.  The tequilas were provided by Casa Herradura, which makes its products in the village of Amatitan, in Jalisco state.  The audience was a group of golf and travel writers from the U.S., Mexico, Canada and Austria, a few of whom warily eyed the four small glasses of tequila lined up in front of their plates.

A San Antonio native, Hernandez was trained at the Culinary Institute of American in New York, and cooked at some of the country’s leading hotels.  After moving home in the early 1990s, he opened a catering business and began earning recognition for a distinctive style that was greatly influenced by his father’s San Antonio restaurant, by growing up in a community of fellow first-generation Mexican- Americans, and studying the foods and traditions of his ancestral land.  He opened the new restaurant in May of 2010.

The menu at La Gloria – -which means “the heavens” – – is an eclectic spread.  It includes Tacos Al Pastor, with thin slices of marinated spit-roasted pork served with pineapple, onions and cilantro.  There also are Tlayudas, a large corn tortilla that is the base for something of a Mexican pizza, the most traditional of which is covered with black beans, shredded queso Oaxaca, lettuce and tomatoes.  And then there are the Tortas Y Mas, which are the sandwiches common to Mexico’s interior, including one that’s served on a grilled bolillo – – a savory Mexican variation of the baguette – – with pork, lettuce, tomatoes, avocado and cream chipotle.

Founded in 1870, Casa Herradura makes all of its tequilas from the blue agave plant, some grown in the lowlands and others in highlands, which along with aging times and techniques imparts different flavors. While now owned by Brown Forman, Herradurra’s clear and golden liquids are still made in a traditional way, cooking the agave in clay ovens and fermenting the liquids naturally with yeast.

For the dinner at La Gloria, Herradurra’s director for brand development, Ruben Aceves, brought four different tequilas, including one from a single barrel made exclusively for Johnny Hernandez.  “Be sure to sip,” he warned the crowd at the table, while explaining the differences between blanco, reposado and anejo tequilas.  “We’re not doing shooters.  These are meant to go with the meal.”

The food and the tequila started from light to heavy, explained Hernandez, who for an opener choose a Shrimp Aguachile Shooter, which is a style of ceviche from the Pacific coast of the states of Sinaloa and Nayarit.  It was paired with Herradura Silver, a blanco that’s aged for  45 days in American white oak barrels, and has an aroma that is crisp, with taste that leaves a hint of mint and pepper, light and ideal for starters.

The second course was a Chile en Nogada, which is a famous chile relleno with walnut sauce, originally found in the state of Puebla. Aceves paired it with the Herradura Reposado, which is aged for 11 months and is slightly softer than the blanco, with hints of vanilla, orange peal zest, cinnamon and banana.  It’s been noted that reposados have the ability to change flavors even after it’s been swallowed, and each sip does call forth different subtleties, including hazelnut.

For the third course Hernandez served Mar y Tierra, or surf and turf, which in this case included Shrimp Ajio and Filet a la Tamarindo, or filet mignon.  It was paired with Herradura Anejo, the line’s strongest tasting tequila, which is aged for 24 months in American oak barrels and has aromas redolent of fresh cut wood, vanilla and caramel. 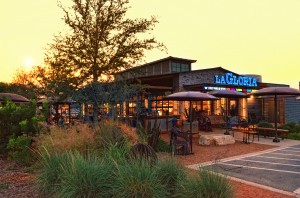 For the final course we had Cajeta Pound Cake with Mexican Vanilla Ice Cream, which was meant to be paired with the special reposado made just for Hernandez, which was aged for 11 months in one oak barrel, and then transferred to a new and freshly-toasted barrel for an additional month, which gives it an additional layer of flavor.

Granted, tequila and food pairings may not be for everyone – – and a couple in the group wouldn’t even take a sip – – but for those who enjoy food and adult beverages, the subtleties of the three distinct flavors add a luscious dimension to Johnny Hernandez’ heartland Mexico creations.