Every golfer knows that deep down, at its very essence, golf was designed to drive you crazy.  Golf is the antidote to contentment.  The best players in the world will tear their swings apart in hope of improvement, even at the risk of losing the proficiency that allowed them to achieve preeminence in the first place.  Remember David Duval?  Padraig Harrington, after his three majors?  Tiger Woods, now heading into his third or fourth swing resuscitation?

But now there’s evidence that playing even mediocre golf can protect you from dementia if you walk the course while you’re playing.  This is a pretty attractive and not insignificant benefit.  In an article in the Portland Oregonian, reporter Julie Sullivan described the results of an investigation by “Researchers at the University of Pittsburgh who studied people in their mid-60s over 13 years found that those who walked six to nine miles a week — about a mile a day — had more gray matter and less memory loss than their peers. Gray matter is the part of the brain involved in muscle control, seeing, speaking, hearing and memory.” 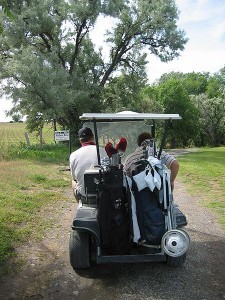 The Road to Senility

These were not golfers’ brains, so perhaps there is some selection bias at work, but it’s likely that all the walking we golfers do could, beyond the irritations accompanying missed putts and the occasional shank, help keep us mentally fit.  So get out of those buggies and step into a wise old age.