Charles Mann’s observations about China’s role in the forging of the modern world in his brilliant new book, 1493: Uncovering the New World Columbus Created, are especially fascinating in light of China’s embrace of golf.  A late-blooming minor component of the Columbian exchange, golf has a peculiar status in China—both condemned and celebrated.   Like much of what China has borrowed from the west, golf in the Celestial Kingdom has acquired a distinctive Chinese flavor.

A recent article in China Daily USA reports that only the rich play golf in China.   Chinese golf is certainly elitist, keeping with the Chinese tradition of preserving luxury goods for the emperor and his circle.  That’s part of golf’s attraction to young people, who flood the annual golf shows in Guangzhou and Beijing—they aspire to a lifestyle that includes playing golf.  Membership fees at Chinese golf clubs—and there are no daily fee courses in China, both for economic and cultural reasons— range from 100,000 to 1.7 million Yuan, or in US dollars, between $15,685 and $266,650.  And this in a country with an average per capita income of $4,400, compared to the US’s $46,860.

One avid Chinese golfer, described in the China Daily story as a Beijing businessman who plays golf every day and spends $15,640 annually to support his habit, called golf “green opium,” linking it to another famous addiction introduced to China by the West.   Britain’s opium smuggling from India led to the world’s first drug wars, the 19th century Opium Wars.   American merchants were also complicit in this trade.   These original narcotraficantes’ ruthless disregard for the Chinese peoples’ well-being was equal to the contempt any Mexican or Colombian drug lord holds for the gringos.

Now China’s emperor is called the Premier, and he’s no longer born into the job.  The premier’s courtiers–the inner circle of the ruling Communist party–play golf.  There is a tight link in China, despite its official adherence to communism, between wealth, privilege and political power.   The government’s policies since 2004 have officially circumscribed golf’s development, in order to preserve farm land and water.   But this official moratorium by the State Council was ignored until the summer of 2011, when, as the China Daily article puts it, “11 Chinese ministries collectively ordered new checks on all golf courses to prevent illegal land use and seizure and to ensure no loss of farmland in China.”

Enforcing the moratorium has had a powerful effect on the group of western golf course architects, project managers, course operators and others who have a stake in China’s golf industry.   The collapse of the US real estate market had already vitiated the demand for their services at home.   China is without question the most powerful developing market in golf, and the uncertainty over its future is very worrisome to industry insiders, among whom I include myself.

1493 helped me understand how China’s golf scene fits into larger patterns of Chinese politics and history.   I’ve wondered why, if there really was a moratorium in place since 2004, our clients in the provinces tended to pay it little heed.   It’s partly because China is a culturally complex country, where conflicts between the capital and the provinces are historically endemic.  Local leaders in Fujian province, or in Yunnan or Sichuan or Guangdong, have always tried to trick the big boys in Beijing.

Two years ago I was riding from the city center of Chengdu toward a site where our client intended to develop a large real estate project with 36 holes of golf.   Chengdu is the capital and most important city in Sichuan province, a region admired throughout China for its natural beauty and cuisine.   Giant pandas are native to the bamboo forests along the mountain slopes in western Sichuan.

As we were driving south, I noticed a complex of buildings that looked sort of like the Bird’s Nest stadium in Beijing, but on an even grander scale.  There were a number of linked buildings nestled within elaborately landscaped grounds, but no evidence of any activity going on in any of them.   I asked our client what these buildings were, and got a wan, wry smile in reply.

Sichuan province, you’ll recall, had a terrible earthquake in the spring of 2008.    The epicenter was about 80 kilometers northwest of Chengdu, but the quake was felt as far away as Beijing.   Schools collapsed, and thousands of children were killed, which led to charges of corruption against the officials in charge of building the classrooms.  More than 70,000 people were killed and millions left homeless.   Premier Wen Jiabao came down from Beijing to assess the damage and assist in guiding the rescue operations.  And here’s where the new building complex comes back into the picture.

This was the new administrative headquarters for the party and the municipal government.  Designed by the French architect Paul Andreu, who also designed the new opera house in Beijing, the complex reportedly cost $180 million.  A new “Technology and Science Enterprising Center” was also part of the complex.  In the context of millions of people left homeless by the earthquake, coupled with intense public criticism over shoddy construction practices having contributed to the loss of life, the big cheeses from Beijing ordered the Sichuanese to get rid of these new buildings.    Local officials announced that they would sell them.   That’s why they were sitting empty a year later.   But according to a BBC report in the spring of this year, the buildings have not been sold.    As Charles Mann demonstrates in 1493, that’s a typical narrative in China.  Orders come down from Beijing, local officials announce their capitulation, and then nothing more happens.

“In the feud- and faction-ridden Ming court,” Mann writes, referring to the period between 1368 and 1644, when China first encountered western traders arriving by sea, “government policies were often accidental by-products of ministerial intrigues, enacted with little regard for their actual effects.”   Echoes of these Ming policies reverberate off the walls today in Zhongnanhai, the Beijing neighborhood where the present government is headquartered.

Mann writes about the wonderfully convoluted trade practices that evolved among Chinese and European merchants, for example, especially the relationship between Fujianese and Spanish traders through the port of Manila in the Philippines.   The emperors wanted a monopoly on trade, just as the current government preserves its monopoly on land.   But the policies prohibiting trade didn’t work for the emperors, and the current land policies have created a giant headache for the central government.

Throughout it all, the qualities that have made China preeminent in so many arenas, whatever the shifts in regimes or policies, shine through.   Our tendency to think of Chinese manufacturers producing products for the global economy as something unique to the post-Mao era is misplaced, as Mann makes clear.   The Chinese in the Philippines were restricted to a ghetto adjacent to Manila called the Parián.  “Parián artisans and merchants…”—most from Fujian province, Mann notes—“sold the Spaniards everything from roof tiles to marble statues of baby Jesus—‘much prettier articles than are made in Spain,’” noted a Spanish clergyman in Manila, “and sometimes so cheap that I am ashamed to mention it.”

Chinese tailors were also making “perfect knockoffs of the latest European styles.”   The Europeans then tried to abolish trade in finished goods, wanting only the cloth—rehearsing disputes that would echo in modern trade agreements.

Mann also describes how the introduction of American crops—particularly the sweet potato, maize, and tobacco—radically transformed the Chinese countryside.  Vast new regions of Sichuan, for example, which is described prior to the end of the 18th century as a “big, empty place,” were settled.  Just as the potato facilitated a population boom in Ireland, with tragic consequences, the American crops introduced to China instigated a series of transformations that ruptured the Emperor’s control over the provinces.  Forests cleared to grow tobacco, even though the crop was officially prohibited, resulted in shortages of rice and inflated food prices.   Hungry people will fight to survive, and rebellions against imperial authority punctuate China’s history.   China’s current rulers obsess over food security.   There is a direct link between the government’s commitment to low food prices and its complicated attitude toward golf development. 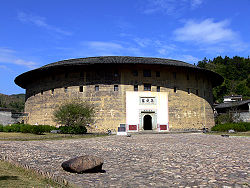 There isn’t space to review all of Mann’s analysis here, but I recommend that anyone with an interest in China’s economy—and especially people in the golf business—pick up a copy of 1493.   Pay close attention to “Part Two: Pacific Journeys.”   Among the episodes of Chinese history recounted in 1493 is the tale of the Hakka people after the introduction of American crops to China.    The Hakka historically practiced slash and burn agriculture on hilly, marginal land in southern China, occupying parts of Jiangxi, Fujian, Guangdong, and Hainan Provinces.  They lived collectively in large, round, well-defended structures called tulou.   They quickly adopted tobacco as a cash crop, contributing to the crisis described above.  The environmental effects of the deforestation practices following the introduction of tobacco are still in evidence in southern China.

The new Mission Hills golf resort on Hainan Island is one of China’s grandest golf developments, following on the success of the original Mission Hills in Shenzhen.   There are ten new courses designed by Schmidt-Curley, along with villas, hotels and spa.   It’s a grand complex, the equal or better of any golf resort in the world.   And one of the architectural themes at Mission Hills Haikou is a tribute to the tulou.   Guests with a view from the upper floors of the hotel toward the south will see the rounded walls of a large faux-tulou.   Merging an ancient Chinese architectural style with the grandiose amenities of a modern golf resort, Mission Hills’ version of the tulou expresses a typically contemporary Chinese affection for the ancient and enduring leavened with the allure of foreign luxuries.