Watching Rory McIlroy transmogrify during the final round of the Masters, morphing from the best golfer in the world, which he had clearly been on the previous three days, into a shell-shocked zombie with a caddy, underscores how delicate the line is between excellence and ineptitude in tournament golf.   It was painful to watch Rory wandering about  between two cabins so far to the left of the tenth hole that he could barely be seen from the fairway.   Those pine trees in front of him must have looked like prison bars from where Rory was standing. 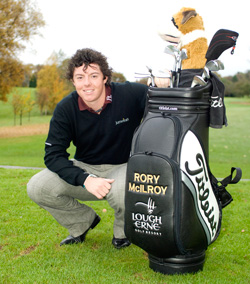 Rory -- Before the Lizard Bit

McIlroy showed his grit in the stand-up interview he did with Peter Kostis just moments after missing a very short putt for birdie on 18—the putt that would have, as Jim Nantz noted, let him break 80.  “Can Rory McIlroy break 80?” is a question no one ever expected to hear posed.  Rory didn’t duck Kostis’s questions about what happened—which was to acknowledge that he had lost control of his emotions after the pulled tee shot on ten, got out of his routines, and forgot what had enabled him to walk to the first tee on Sunday with a four shot lead.  He broke under the pressure–first slowly, and then all at once.

There was little McIlroy could do to recover after the anxiety kicked in.  That’s not a question of his character, but reflects a basic biological truth, according to a fine new book by a Portland Oregon, writer named Taylor Clark.  Nerve explains why Rory’s fine-motor skills skedaddled when anxiety stepped in and confidence fled.

A lizard lurks in your brain, Clark explains, concealed and quiescent until something startles it awake.  Then the reptile takes charge, obliterating your deliberate self as it poses its three timeless options: fight, flee, or freeze.   McIlroy walked onto the tenth tee a confident and composed man, but after that pull hook into the woods, the lizard took over.

Golfers have long been acquainted with the lizard’s tyranny, even if they have called it by other names.   Great golfers learn to live with the lizard, signing a peace treaty that will let them control their swings even when the wind is swirling on Sunday at the Masters.    But what gives rise to the performance anxiety so many of us feel on the golf course, even when playing with no more at stake than a five dollar Nassau and the chance to feel smug in the bar?   And what role might the lizard have played in McIlroy’s collapse, or in Greg Norman’s meltdown at Augusta in 1996—the afternoon Rick Reilly called “the equivalent of a four-hour air ball.”

Nerve is an account of how this residual kernel of our reptilian ancestry known as the amygdala, which I am calling the lizard, operates—and how it might be influencing the performance of even a world-class athlete like McIlroy or Norman. 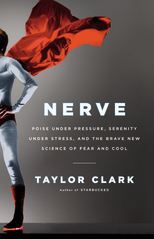 Clark’s examination of how fear works begins with a survey of the latest science on the existence and functions of each of our two brains: the one we’re proud of, that writes love songs and puts men on the moon, and invents a game where you hit a ball across a vast landscape of turf grass and heather in hopes of sinking it in a tiny hole off in the distance; and that skulking lizard, able to make us strike out, freeze, or melt in terror.   Once the amygdala is engaged, Clark makes clear, it’s the part of our brain that’s in charge.

From an evolutionary point of view, the persistence of this lizard soul provides us with an early warning system that is faster and more reliable than the more recently-evolved rational parts of our brain.  “Our brains are actually designed,” Clark writes, “to thwart our efforts to consciously override the fear response.”   That’s why when the lizard appears, it is so hard to persuade him to return to his cave.  How many more times is McIlroy likely to four-putt from twenty feet in his career?  The answer would be none, so long as the lizard stays home.

Why should that be so?  Charles Darwin, puzzled over this question—that is, why can’t we control our reflexive responses— performed an experiment.  Determined not to flinch, Darwin would stick his face against the glass of a puff adder’s cage at the London zoo, waiting for the snake to strike.

“Time after time, no matter how strong his determination,” Clark writes, Darwin “got the same result.  ‘As soon as the blow was struck….my resolution went for nothing and I jumped a yard or two backward with astonishing rapidity.’”

This automatic reaction protects us by stimulating our bodies to perform amazing physical feats–actions that our conscious selves are incapable of accomplishing.   Our adrenalin arsenal is commandeered by General Lizard, and not by the deliberate, cautious staff officers patrolling our frontal lobes.

Fear is the primal emotion.  Fear can get us out of danger.  If I see terror on your face, I know to run (or perhaps freeze).   The problem for modern humans, who are unlikely ever to encounter a predator face to face (other than our fellow man), is that our fear system learns to engage over seemingly trivial or irrational triggers, such as whether or not to get on an airplane—or the challenge of hitting a shot over that lake fronting the green on the 18th hole at Pumpkin Ridge’s Ghost Creek.

Once he’s laid out the basic understanding of how fear works in the brain, Clark segues into a long discussion of how we can learn to deal with our fears— how we can tame the lizard, converting it from an incapacitating ogre to a passive observer.

As Nerve shifts from popular science to self-help, it stops short of providing  a practical guide to fear management.  It does, however, offer a series of useful suggestions and strategies for how someone trapped in a cycle of anxiety and worry can learn to cope.  Clark prepares for this primer through an examination of a series of case studies that show how people confronting real crises—landing a crippled plane, fighting an overwhelming enemy, throwing a major league fastball over the plate—have managed to harness their adrenalin and get on with the business at hand.   We are all capable of learning how to manage our fears, Clark contends.

“Fear springs from the subconscious amygdala,” Clark writes, “not the thinking cortex, so trying to think your way out of feeling afraid is like using a hammer to twist in a screw.”   Still, he recommends a series of steps for making peace with the lizard.   This is the kind of planning and learning that our big brains specialize in.    The socially constructed fears Clark describes—fear of flying or worrying about losing a job or the terror of slicing a tee shot out of bounds—don’t have exactly the same neurological basis as avoiding a striking puff adder.

“Fear,” Clark explains, “is primarily physiological and anxiety is mainly cognitive, but stress can come from the body, the mind, or both at once.  Stress is the body’s response to circumstances we perceive as trying, strenuous, or just plain irritating.”

Now we’re back on the 10th tee with Rory at Augusta, as he watches his drive hook into the trees and disappear from view.  “When the brain’s fear system revs up,” Clark explains, “adrenalin directs oxygen and glucose into the large muscle groups that enable us to fight or flee, disrupting our more intricate motor skills.”  Is this starting to sound familiar?  “Hands become shaky and clammy with lack of blood flow.  Heart rate and breathing quicken, providing the body with more oxygen but dealing another blow to fine motor control.  Digestion and saliva production shut down, bringing on butterflies and cotton mouth.”

Greg Norman’s collapse at the 1996 Masters was a text-book case of “explicit monitoring theory”—a fancy way of saying “too much thinking.”  “When anxiety turns our attention inward and we try to consciously control a highly rehearsed skill,” Clark writes, “we essentially ditch our hard-won subconscious expertise.” 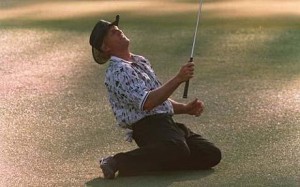 So maybe all the commentators who counsel golfers starting to lose their concentration to “slow down” aren’t giving them sensible advice.  Not too quick, but not too slow, either—getting into the “normal” groove is the key to success.  But how do you do that when you already feel as if you’ve fallen off the roof?

Experts who have studied how people react to crises—who have tried to discover what separates the helpless from the heroes—have learned a great deal about what goes on in the mind and body when the amygdala engages.

“Fear is good,” Clark insists.  “It protects us, gives body and character to existence, points us in the direction of what we value.  We couldn’t make decisions or perform our best or even survive without it.”

But if we haven’t learned how to respond when the lizard takes command, we experience what Rory McIlroy endured on Sunday.   When, at the end of the round, Mcllroy put a positive spin on his collapse, saying he hoped to learn from it and expected to be competing for a major championship again before too long, he was reacting sensibly to his what had happened—the lizard was back in its cave, and McIlroy’s rational mode reasserted itself.

“We may not be able to reason like champions when disaster strikes,” Clark writes, “and we might find our experience of reality unhelpfully distorted, but we do have one means of stacking the odds in our favor.  Through training, we can preload our instincts.”

Here’s the path forward for McIlroy.  We know when he’s relaxed and confident he can play golf as well as anyone alive.  Now that he has experienced the lizard’s frontal assault, he can learn how to prepare for it next time—not to hold the lizard at bay, which is impossible, but to be prepared for the next emergency.  He doesn’t need more time on the range—he just needs to learn how, as Clark writes, “to work with fear.” 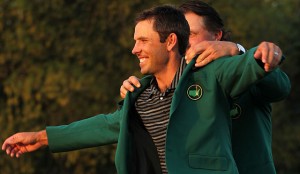