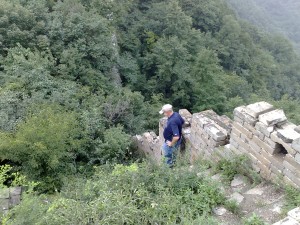 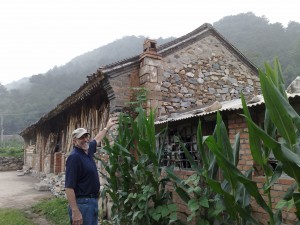 My friends Robert Devine and Shan Zhou are developing a fantastic eco-resort at the base of a section of the Great Wall north of Beijing.  Almost 20 kilometers of Great Wall forms a looping boundary of the valley into which the amenities of the  resort will be fitted.  It runs atop a ridge line that’s so steep in places that the stairs to ascend it have the pitch of a ladder.  The views are astonishing, and it’s impossible to be on it without feeling admiration for the people who were able to build it.   Of the 15 or so square kilometers the Great Wall Resort will control, only 3% will have any buildings or development associated with the Resort.  The rest is a combination of forest, natural landscapes, and traditional farming modified by a commitment to organic and sustainable practices.  They are also planting vineyards.   Beijing’s climate is a  mix of Houston and Stockholm’s, so getting the right grapes will be a challenge.  But Robert and Shan are passionate about doing the right thing, so I expect the Great Wall Resort will be known before too long as one of the world’s great getaways.   What they won’t do is continue certain local building practices.  As we were walking through a tiny village coming back to our car after several hours on the Great Wall, Shan pointed out the chimney on the house we were passing–made with Great Wall bricks.  The locals have been mining the wall for generations, just as people do world-wide when regimes fall and old defenses crumble.  The Coliseum in Rome was a handy quarry for the Church for centuries.   People living now at the base of the Great Wall now may have ancient memories of ancestors forced to build the damn thing.   There’s no sentimentality about the Wall.  The Wall also provides some jobs–after hiking up about 800 meters to the base of the local Wall and then hand-over-hand up a makeshift ladder to reach the top, I was feeling proud of my fitness when I heard a loud “ni hao,” looked up and saw an 80 year man smoking a cigarette and offering to sell me a bottle of water from the cooler he’d shlepped up to his mini-kiosk on top of the ridge.

One Response to “Great Wall as Home Depot”