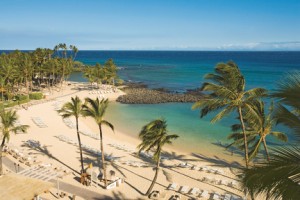 Pauoa Bay and the anyone-can-snorkel-here cove at Fairmont Orchid.

Snorkeling? I remember my first experience, aside from childhood splashes at Corona del Mar. It was off Puerto Vallarta, on the cold side of the Pacific, in turbid waters, with a leaky mask and exactly three orange fish that may well have been shards of a Caltrans traffic cone if such things migrate that far south.  Moved I wasn’t.

Moved I am, resurrected by Caribbean shores and one particular hunk of volcano out in the Pacific. From honu to humuhumunukunukuapua’a, it’s fin to win on the sunny side of the Big Island.

Waialea Bay is a find within the rocky, wave-tussled expanse of the Puako coast. The beach rolls out as a string of shallow amphitheaters pocked abundantly with canopies of shade trees. There’s good parking yet no huge crowds. The inlet is surge-protected in summer, and most particularly earlier in the day, and you amble in easily right off the sand. This is a spot to pack food and drink, toss a book and the iPad in the snorkel bag, and hang for the day. Turn off the main highway on Puako Beach Drive and then turn right on Old Puako Road. Drive about a mile north, turn left into the parking area. In the day locals referred to this beach by the number on the telephone pole that signaled where to pull over, park and walk in. The ensemble of attributes at Beach 69 makes me question why the guidebooks tout certain beaches like A-Bay down the coast.  Then I recall those writers live in these here parts.

The beach club at the Fairmont Orchid on Pauao Bay is as flipper friendly as, well, Flipper, and there’s nothing wrong with that—Sea Hunt wasn’t exactly shot in shark-infested waters off the coast of Australia. A reef-protected cove that teams with sealife—wrasse, clown fish, eel, angelfish, puffer, ray, sea turtle (honu), the ovoid rainbow of color that is the antisocial Picasso triggerfish, or humuhumu-and-so-forth, octopi—there are few places better for newbies to get their feet wet without boring the more seaworthy.  Now the “beach club” itself is private but the shoreline and the water are all public; don’t expropriate a paying customer’s chaise. Public parking—and facilities, including bbq grills and a short interpretive trail through the kiawe trees and ancient petroglyphs—are located at Holoholokai Beach Park just northerly of the Fairmont. The shore is very rocky here and the sea can really rumble, but you can park and amble on over to the beach.

Around the point from the Fairmont, Mauna Lani Bay Hotel and Bungalows possesses a broad front along Makaiwa Bay that offers decent splashing and at one end a good beach club for swimming, and since the only water around hear lacking fish is that which comes out of the tap you can do quite enough you-didn’t-take-your-meds-did-you? spasmodic undersea gesturing as this and that swims by . For the seasoned, the trick at Mauna Lani is to traipse around the shoreline to the golf course, and clamber down to the cove that separates the 15th green from the 15th tee; coincidentally, this is one of the greatest golf holes in all of existence.  (Or continue to the inlet farther south before the similarly shore-hugging 7th hole—Honokaope Bay). As with hiking beyond the “scenic wonder” turnout along the highway, the effort is repaid when visiting this perfect horseshoe of sapphire ringed by a supersized coffee ground jumble of lava. Caveat snorkeler: I am not a land surveyor. I cannot verify where private property ends and public lands begin. But the shoreline is public and access must be allowed. A walking path leads from the resort to the 15th green.  Caveat dos: This is an open cove, accessed from a rocky shore, so use your smarts.

Tearing southward off the Kona Coast, my wife smiles and yells through the din, “You look like Max!”  I imagine I do look like Grinch’s pooch. It’s easy to pull off when sitting up front in my “sleigh,” a metal-hulled Zodiac doing what feels like Mach 2 and hoping there is more in reserve. We’re coming at the fish from their side now, which makes sense since everyone from Polynesian explorers to Capt. Cook to Japanese dive-bombers got to the islands via the sea.  Speaking of Cook, this is where took his final plunge, so to say, but that’s another story.

It’s either the most-worth-the-effort-to-get-there-somewhat-accessible snorkel spot around, or the most overrun: Kealakekua Bay.  Plopping over the edge of the Zodiac in my best Clouseau fashion, I’m facing … the abyss. I jest not.  The floor has dropped out of the world and it’s a straight shot to Titanicville.

Chill.  Chill.  Breathe.  Breathe.  Kick.  Kick.  Ink turns to cobalt that recedes into aqua as the basement rises.  Phew, terra firma, or at least terra wetta but only 30 now 25 now 10 feet below me. And fish. Lotsa fish.  Gobs of fish. The world’s greatest all-you-can-eat-sushi-bar of fish. With a decent grease pencil I could circle about three-quarters of the specimens on the handy plastic Gill-o-pedia I picked up at the airport. (I spy a tuna out over where the elevator has but a lone long direction; our guide says it’s a jack.  The customer is always right.) There’s a great collision of truly deep water and rigid island at Kealakekua so the reef is healthy and busy.

Alas, with our kind, as well. A dozen folks in a Zodiac don’t a horde make, but when the party barges come in laden with water slides, barbecues and a Sun City or three of knee-sock-and-water-wing wearers, it gets busy. The fish don’t seem to mind. And you often can catch a pod of spinner dolphins, three-foot torpedoes of cuteness that tone it down here, swimming in slow circles as they shut down systems and recharge their batteries. Overland access requires some driving moxie and foot time, so the vast majority of visitors arrive as we did via the assistance of an outfitter—Sea Quest in our case, and highly recommended (www.seaquesthawaii.com; 808/329-7238)—and some paddle across the bay.

And if you don’t have gear, outfitters can suit you up.  Just don’t count on being fitted with any of those fancy geriatric reef shoes.