As it lay there with the shadows of the mountains brilliantly photographed upon its still surface I thought it must surely be the fairest picture the whole earth affords.

America’s Bard got it.  Tahoe is a fair picture.  And whatever the season, whatever your relation to the lake—floating on it, swimming in it, star-gazing or skiing above it, golfing beside it, simply gawking at it—the larger image is similarly evocative. 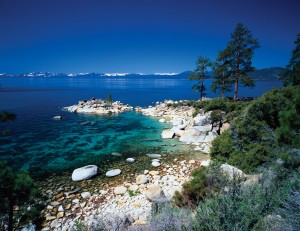 “So I’m thinking to myself,” reflects Becca Knopf.  “‘I’m in Lake Tahoe right now.  In the lake.  And it’s really cold. And life is so good. The water is cold and I’m thinking how good life is.’”

The power of blue.

The twentysomething’s first-ever kayaking experience includes an unexpected dip in the chilly liquid majesty that is Lake Tahoe. It’s a guided group kayak trip, a team-building exercise with colleagues—she’s in administration at a Bay Area college—that includes a match of ultimate Frisbee, lake-style, which precipitates her dunking.

Any excursion under your own power is an excursion well earned and uniquely enjoyed. Nosing about the lake, a ribbon of ripple unraveling evenly off the bow, petit snaps of water that turn to a lithe, even riffle when cadence is mastered, catching the evening flash of a nest-returning eagle, being within the ever-present ring of the girding Sierra; a Tahoe paddle is just such an excursion.

Knopf is a kayak convert.  Since that first paddle—and unintended dip— a summer or two ago she’s been hooked, and now goes out on her own on nearby Donner Lake.  Yet it’s Tahoe that calls most seductively and when winter yields to spring she’ll be back on the big blue for as she knows, “It’s breathtaking to be out on the water and there’s something significant about Lake Tahoe.  Gliding across the lake is incredible.  There’s something spiritual about it.”

You hear that a lot up at the lake.

Spending far too much vacation time in environs of cactus and roadrunner, Edgewood-Tahoe Golf Club is for me a breath of unique and particularly fresh air.  An 8-iron on a 176-yard par 3 will do that—thank you Ms. Tailwind and Mr. Altitude.  Yet it’s bigger than that.  Edgewood-Tahoe comes at you with its big warm unequivocal-the-puppy-loves-you embrace because parts of it kiss Tahoe and other bits bound through enough trees to make even the most seasoned forest ranger pause and smile.

Designers George and Tom Fazio’s playpen in the pines is a throwback to the days of strategy over brawn.  It’s golf and avoiding stuff like dense stands of sap-makers and the wet stuff is not a bad thing. Trouble here comes as often as not, however, from just being on the wrong side of the fairway and trying to skirt those woody edges, or on the “Oops!” side of greens that if mapped in USGS style would show as lines clustered quite close together. Actually, the trouble—and this is just the type of difficulty we all need—is that distraction in perfect blue just beyond, with the white tips soaring above; Nicklaus would lose focus here.

The course also is home to the American Century Celebrity Golf Championship, the World Cup, Super Bowl and Indy 500 of the “celebrity” golf tour.  Held every July, the jocks, singers and actors who contest the event include a surprisingly high number of great golfers—2010 champ Billy Joe Tolliver, multiple-winner Rick Rhoden, John Elway, actor and this year’s champ, Jack Wagner, to name a few. Yet the fan fun comes at the end of the spectrum where most of us reside, down in the bogey-would-be-good rubble alongside, say, Ray Romano or Don Cheadle or Olympian Bode Miller, but hopefully not Sir Charles.

A chorus of jibberish and stutters and Gerber-age fluff bubbles from the group as we sidle from telescope to naked eye to telescope and back, getting ganders of Saturn on edge doing the Hula Hoop with its silvery rings, our space pal Mars, a binary star, a globular cluster, Polaris.  The good folks at the stunning Ritz-Carlton, Lake Tahoe have teamed with a local company to take folks on a journey through the night, the out-of-doors way not courtesy of some HD TV.

You see, it’s dark at 7,000 feet in the mountains when the moon is switched off and there’s no city glare to erase the ultimate masterpiece. We’re set up several hundred yards from the Ritz, about mid-mountain on the deck of Northstar’s Lodge at Big Springs.  We have at our disposal two GPS-and-computer-equipped Celestron telescopes, the larger of which has a magnification of 175x.  That’s not Hubble-esque but when you consider a decent compact digital camera will have a 4x or 6x optical zoom, that’s closing the gap.   We have our eyes, too.

“Right there.  One, two, and there’s a third, very faint but there it is, three of ‘em.” Amateur astronomer Tony Berendsen, our skyguide and owner of Tahoe Star Tours, is pointing out the visible arms of our great swirling spiral home in the sky.  How cool is that?  We’ve all seen the Milky Way, but to see it in form, with several arms of the celestial octopus popped out from the galactic reef and rolling with the cosmic tides, well, it’s cool.  It is.  You want Stephen Hawking, instead?

Berendsen is the kind of guy who will book a cruise to chase an eclipse. That means he’s well equipped to illuminate the journey, be that directing our gaze to a black hole we of course can’t really see, explaining constellations and their importance to everything from navigation to cultural systems of every earlier generation, or excitedly tearing through an iPad stuffed with pics of the beautiful, infinite tumult way up and out there in what Carl Sagan counseled was “a universe in which there are far more galaxies than people.”  Though a popularizer himself, Sagan is gone, sadly, so it is Berendsen carrying the comforting, homey way of making us feel big in all the vastness:

The moon wandering in the night

Its life of journey provides to us

An illumination of light

Asking so many questions

Reminding us of the wonders.

The universe is all of us.

We need only to answer back.

All this mountain time—including other recent trips to southwestern Montana and Sun Valley—has me thinking back to the day, and I’m saddened by my status as “Skier: Once Addicted; Subcategory: Abjectly Lost.”  Here’s the translation:  Former total ski bum eons removed from the snow now ruing that decision; the too-long-away-from-skiing part not the long-gainfully-employed part.

By the accounting of the local tourism folks, RenoTahoeLand has 23 alpine and nordic ski resorts—reputedly the highest concentration in the great republic—with cachet names like Heavenly and Squaw and Kirkwood.  That’s means nearly 175 lifts and I don’t want to guess how many Everests of vertical.

Squaw Valley-based JT Holmes skis all over the world, really, ALL OVER.  (This interview was bracketed around a K2 catalog photo shoot he did in Chile, for instance.)  Being a professional extreme skier-athlete and film star will do that for a chap; he’s been in nearly 20 movies, most by Matchstick Productions, as well as Warren Miller’s 2009 release, Dynasty.  Yet he’s human, and he’s happy to share his fave, and no passport is required: “Tahoe. Number one.  Seriously.  We have it all.  The best snow; our storms come in warm and leave cold, so we get the best of both worlds. We have our deep days, our spring days, and our fast firm and fun days, and you can get these conditions any month from November to May.  For the serious skier Lake Tahoe is the only choice.”

Raised on the slopes of Squaw, Holmes is still most drawn to that ’60 Olympics-hosting mountain, and notably the “rad varieties of expert terrain” served by its KT-22 lift.  He also knows all aren’t paid to do what he does so effortlessly, and offers options in a voice that only can come from a skier, regardless ability.  “One mustn’t overlook the mellow vibe and lakeview powder stashes provided by Homewood,” he says, “or the open boundaries to the backcountry treasures provided by Mt. Rose, Sugar Bowl and Alpine Meadows.

“When you get to the summit of any of the Lake Tahoe resorts you look around and see that beautiful Lake Tahoe view, and you just feel lucky. I have skied here for 27 years and the lake still has the power over me to just make my day.”