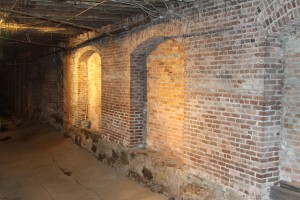 It's never cloudy and drippy down in the Seattle Underground

“Here Come the Brides” was a cutesy bouncy TV show from long ago about virtuous homespun girls brought in to nurture the late-19th-century Seattle frontier.  Now real-life women obviously, albeit sparsely, populated the Emerald City at that time.  And on their backs, literally, some 2,500 of the less virtuous ones helped raise Seattle … literally and, um, literally.

The story of Seattle’s ascent out of the tidal flats of Puget Sound is somewhat bawdy.  But most of all it’s a tale of bad plumbing and engineering ingenuity—with the requisite sin and vice tossed in.

“You’ve just walked through a second-floor window,” our group is told by an obviously delusional guide.  I know I stepped from the street through a doorway.  And so begins a 90-minute, three-block, mostly subterranean trip of suspended belief down and through the time portal of the Seattle underground.  Pointing to a period photo on the wall, Tug highlights where our entryway once resided, as a window, on the second floor.  We follow him down a flight of stairs to what’s obviously a basement of stone wall and timber-and-brick overhead, filled with the detritus of any basement:  old fixtures, furniture, wiring, pipes.

Tug never misses a step in his upbeat sing-song calling out as he leads us on:  “Welcome to ground level.  Back in the early 1890s, these spaces were shops and offices, and there was a busy street just past that wall.  If you go up to our International District, our Chinatown here, and you see an old brick or stone building that’s one story tall—sorry folks, that building’s actually three stories tall from the base.  There are two full floors of that building that are now underground.”

Suspend belief; and a bit of a history lesson helps the process. 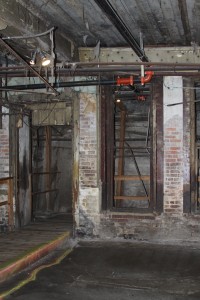 A building "exterior," with doorway and windows

After its founding in the mid-1800s, what we now know as Seattle started gaining an increasing toehold in the muck that rimmed Elliott Bay.  Because Puget Sound is tidal, the location wasn’t ideal, as the bayside setting and twice-a-day ebb-flow cycles caused flooding and, in an oft repeated refrain on these tours, problems for a recent invention, the water closet.  Being busy booming, Seattle didn’t really have time to worry about mundane matters like occasionally wet feet and buildings, and up-surging toilets.

Anyway, Seattle is rolling along in the 1880s when in the last summer of the decade the timber town built of lumber burned to the ground.  The city mandated new building standards, including the use of fire-resistant stone or brick.  Seattle quickly rose again, with one problem addressed and two others ignored.

“In order to solve Seattle’s continuing tide and draining problems,” Tug says in what is a massive understatement, “the engineers came up with an extraordinary if unorthodox plan:  ‘We’re going to raise the streets.’ And that’s exactly what they did.”

We’ve stopped in a second submerged building, listening to the unfolding tale of seawater and regurgitating toilets overcome by American grit.  As you might now expect, we’re not in a building.

“Beneath your feet is the old sidewalk, and right here folks, this is a retaining wall built of stone, not a building exterior.  This one if four feet thick and 12 feet tall, and there’s another one just like it that runs parallel to it on the other side of the street.  That,” Tug gestures upward, “that’s the underside of the ‘new’ sidewalk.”

Through the 1890s, the city embarked on a 30-plus-block project of raising streets between the existing buildings by constructing retaining walls and backfilling with terra firma. And because the project was as much about getting “stuff” to gravity flow to the bay and stay out there, the new utility lines embedded into the new streets needed to drain, so that’s why parts of Chinatown were treated to multi-story-swallowing streets. 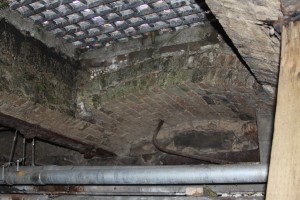 A sidewalk-embedded skylight illuminates another sidewalk down below

“So where do the hookers fit in?” inquires a member of our group, reflecting back to a portion of the pre-tour introduction that obviously resonates with his wiring.

As happens, the city ran out of money after the streets were constructed but before the new sidewalks were capped.  It’s hard to fathom, but for a time in this part of Seattle if you wanted to cross the street you’d exit a building and be greeted by a block-long monolith of stone and mortar.  You’d walk along it on the sidewalk to the corner, climb up a ladder, cross the street, and climb down another ladder; and some of these ladders were 35-feet tall.  Now multiply that by a shopping excursion that might cover six or ten blocks and who is gonna complain about schlepping the Costo mega-pack of TP from the SUV to the house? With the pattern of building, sunken open-aired sidewalk, raised street, sunken open-aired sidewalk and building, Seattle resembled, in Tug’s words, “a giant lopsided waffle.”

Tug tells of an occupational census that turned up a large population of “seamstresses” who didn’t sew much, though the boarding houses where they lived sported red lights.  The city being a city—and local taxmen not eager to try to extract wages from the #1 employment sector in town, big strong lumberman—it was decided to tax the girls and all gambling tables.  Sin most definitely was in as the “Seattle Entertainment Tax” accounted for nearly 90 percent of city revenues over a nine-year period.

“Our city is founded on the pillars of society,” Tug says, then pauses for a here-comes-a-quip moment.  “Swindlers, profiteers and prostitutes! Yea, Seattle.”

Flush with cash the city set about building I-beam-and-masonry arches between building exteriors and the retaining walls, then capped between to create at-grade sidewalks.  Commerce and foot traffic continued for a few years in all the new subterranean walks and lower-floors-turned-basements, until a plague scare in 1907 led to their abandonment.  Booze smuggling brought some renewed but short-lived bustle during Prohibition, and the underground again disappeared from sight and mind until the late Bill Speidel started leading groups down in the ‘60s. 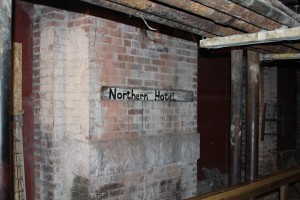 No reservation? No problem

Reportedly, more earth was moved to fill and raise the area around Pioneer Square, where the tours are conducted, and on over to the International District, than was gouged out of the isthmus to make the Panama Canal.  And remember that date; no one had a Cat D11 dozer, a scraper or a steam shovel.  The material was sluiced off the adjoining hillsides with water, the masonry forms filled, and Seattle checkerboarded up out of the ooze.  A collateral benefit of all that not-exactly-green activity is that Seattle’s infamous hills—if you’ve walked from the ferry terminal to say Capitol Hill you know what I mean—possess about one-third the gradient they did back in the day.