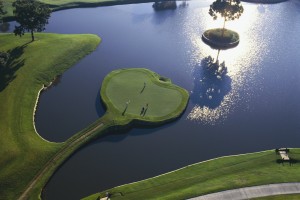 Nothing like a caddy dispensing reasoned guidance.  And go I do, at TPC Sawgrass, the infamous Players Stadium Course, # 10.  My drive settles between a bunker and a meter-high bank, and as I take my stance a palmetto is trying way too hard to get to know me.  Oh, and I need to hit a projectile hook.  With a wedge.

I seem to recall that Phil stuck it on the green and converted the birdie.  My bladed hosel-rocket produces one third of that magic Vegas combo (you know, 7-7-7). Phil of course hits the ball from the “wrong” side, so he had a level stance and his Callaway orb wasn’t three feet below him, and he had no paramour palmetto with which to contend.

A caddy is a lot like a dog:  The good ones are loyal, supportive, protective.  But neither is all that genetically distinct from a wolf, when you get right down to it.

Stadium is iconic, Pete Dye’s Little Swamp of Horrors in northeastern Florida, where 18 tiny threads of green are woven through a master’s tapestry of pine, sand and water.  If golf was a contact sport, it would be contested here, perpetually.  The players show up for The Players, and year-in, year-out it’s the best field in the game, even if a couple petulant children choose not to play. Sure, the scoring record is a whopping 24-under 264, by Greg Norman back in ’94, and the course record is 63. But it’s not all high-fives and birdies. Back when he had the game in the game, David Duval won at three under. And then there’s the guy who shot 257 in the “America’s Worst Avid Golfer” competition.  That was for one round.

Seventeen is one of the best known holes in all of golf, and owing to 1080p most who know it intimately have never known it physically.  It’s a sweet little thing that reads to players like a Stephen King novella. Sean O’Hair and Paul Goydos are but two of the most recent tour guys to spit the bit, the tourney, the fame, the five-year tour exemption and the billboard-sized check on the dinky island hole.  Bob Tway once chalked up an even dozen strokes.  And albeit anything but a tour player, “worst avid” champ Angelo Spagnolo tallied 66 chunks, dunks, plunks, lashes, slashes and splashes on the hole, with  something like 27 balls in the water and success achieved only after he putted his way around the lake across the isthmus to the green.

It’s an easy hole, 140-ish yards max, less than that for the rest of us.  It’s a wedge, or a mid-wedge.  How hard is that? Given wind, markers and hole location, I hit my 115 club, perfectly. Then the wind dies and my ball sails over the flag, leaving a downhill put with several feet of drop that does NOT adequately show on TV and a route more circuitous than a MLB player explaining something to Congress. The pros gut-check here for one reason—beyond the coin and the trappings—it’s because of the wind, a swirling eddy not unlike that at 12 in the heart of Amen Corner.  The talking heads drone on about the wind, and as it turns out there’s a reason they do.  Forget the water; it’s actually a good-sized target.  It’s the wind, and it can rev up or take a nap, perhaps both, in the handful of seconds that tick off from start of the seizure that is my backswing to the arrival of ball on green—or water.

Walking off, my loyal vassal suggests I’m just another Spagnolo with putter in hand.  Deserved observation or not, it is shocking how they do turn on you, isn’t it? 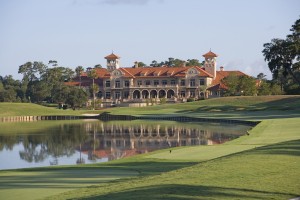 The copy and the cameras always go to 16-17-18, and that’s not surprising in the realm of bulldozer golf.  Back when the pros actually played the La Quinta variant of TPC Sawgrass, the let’s-not-call-it-formulaic/this-closing-rocks finish of reachable par 5 with the requisite doom factor, island green and cape made sure that four strokes  up with three to go could lead to a second-place check.  You think 400,000 people show up at the Waste Management Phoenix Open because TPC Scottsdale pays testament to the design legacy of some long-dead legend?  It’s gladiatorial.

For all the angst, what you find at Sawgrass is an entire golf course, not a contrivance.  The fours are richly varied.  Unless you truly go McIlroy, you can escape from the trees.  The visual cues are guttural yet logical, not the mindless horror show the blimp shots would indicate.  Deft iron play is rewarded.  The kinks were worked out long ago, many pros love it, most seem to respect it, and as with that credit card ad, it is a cool place to play.

As we step up on 18 the wind is slightly in and crossing toward an encroaching, all-the-way-to-the-green body of water large enough to float Nimitz’s fleet.  It’s a left trending boomerang with furry mounds and trees right and a Slip ‘n Slide green wedged in between lake, sand and some kind of elephant burial ground.  It’s set at 410 yards.

“Hey, Spags, you’re a playah,” says my now ever-faithful sidekick in white overalls, smiling broadly and handing me my card.  It’s my sixth par on the back.

Wish I had a Milk Bone or something.