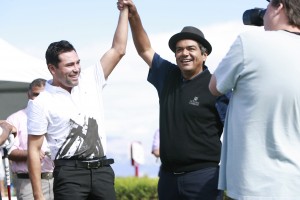 The time is at hand for Las Vegas’ annual Gala on Grass, also known as the Justin Timberlake Shriners Hospitals for Children Open.  If you’ve never witnessed a PGA Tour event and its trappings up close and personal, here’re several reasons why you should consider a bright-light/fresh-air Sin City experience at least once in your life.

While the tournament runs from Thursday Oct. 21 through Sunday Oct. 24, it’s the name on the door that makes Wednesday’s pro-am rock; jocks, actors, singers—Timberlake brings ‘em in like tourists drawn to really bad gambling at Harrah’s. Some of those in the game last year were Kenny G, Oscar De La Hoya, Alice Cooper, George Lopez, Josh Kelley, Timberlake, of course, Chris Kirkpatrick, Phil Hellmuth, who certainly should keep his night job playing poker, and even local LPGA star Natalie Gulbis.  And let’s not forget all those handicap strokes were helping the likes of guys like Anthony Kim, Davis Love III, Jim Furyk, Tim Clark and David Toms.  (Psst, autographs are a lot easier to get on pro-am days.)

Often overlooked in the spectacle that is the PGA Tour is the fact that no other sports association has even remotely approached the amount of money the tour’s donated to charity from its annual tour stops in Monterey, Los Angeles, Hilton Head, Reno and dozens of other towns and cities across the nation. After better than a half-century of endeavor, the tour’s overall tally tops $1.5 billion.

With the principal sponsor also the principal beneficiary, Tournament Director Adam Sperling says it hard to get an exact dollar amount on what’s brought in each year. More important than raw numbers, he explains, is the tournament’s direct affiliation with the hospital network, which in the course of its history has cared for thousands of kids in southern Nevada and who knows how many kagillions elsewhere.  Other community organizations and their constituents benefit, as well. For instance, in 2009 the tourney teamed up with TeamSmile to provide dental care to more than 200 underserved local children.  And this year, community-based organizations are selling advance tickets and retaining a portion of the proceeds for their charitable activities.

Also new for 2010 is a second pro-am hosted by UNLV grad and part-time Vegas resident Charley Hoffman and his wife, Stacy, which will be played on Monday of tourney week.  The two actually host two such events annually, and the first is tied to the tour stop in his hometown of San Diego.  He says he and Stacy recognized there were needs being unmet in their adopted town and they wanted to help, “With all money raised in Las Vegas going back to Las Vegas,” he says, including Blessings in a Backpack, Cystic Fibrosis Foundation, and Juvenile Diabetes Research Foundation.

Sponsorships, pro-am fees, coin spent on beers at the turn; with all, something goes back to the kids.

The Best Entertainment Bang-For-Buck in Town

A daily ticket costs about as much as a fancy burger with some of the trimmings down on the Strip, and as the tour slogan understates, “These Guys are Good.”  What they can do versus what we can do is night and day, and the cost of admission alone is worth the sight and sound of but a single tee shot sent into warp drive.  Wait, then there’s the short-game magic.  Still not convinced? A $2,000 contribution ($7,500 for the big kahuna pro-am) gets you in Charley’s event, perhaps paired with a Nick Watney or Tom Pernice or Chris Riley, on a course set up for a PGA Tour event, doing combat with others and armed with the knowledge that the 17 “Xs” by your name mean diddly when your gross birdie/net eagle on the last puts your team on the podium.  Anyway, you get some nice swag, Charley does a clinic where you might actually learn something and the price of admission could be one helluva lot less than the cost of a like amount of time in the casino.

“The tournament is a conduit for the community to come together, to relax, be entertained by the finest golfers in the world, and to enjoy themselves,” says Sperling.  “Where else can you go purchase entertainment for yourself and support a cause as wonderful as the Shriners Hospitals for Children? To watch PGA Tour golfers compete, support a wonderful cause, soak in the views of Red Rock Canyon, all while spending quality time with your family outdoors, for just $15—how can you justify not attending?”

Looks like Sperling forgot to pitch the pro-am and sponsorship opportunities.

One Response to “In the Land of Milk and Honey, It’s For the Kids, All That Money”