It’s not really a fair fight:  Vegas vs. the Valley of the Sun.  If you’re sitting around talking with the guys and gals, deciding where to take that next desert golf junket, and someone chimes in with “Sin City, baby!” you should consider new friends.   Don’t get me wrong, I’m a real fan of Bugsy’s little hamlet in the sand, and I’ve played every course across Las Vegas and over the three nearby state borders; I’ve even written three guidebooks about Vegas, one of which is about golf.  But if you want your numbers to come up 7-7-7—and have nothing to do with Equitable Stroke Control—there’s only one choice:  Phoenix and Scottsdale.

This is quite simple:  Troon North, We-Ko-Pa, the Boulders, Grayhawk, Eagle Mountain, Dinosaur Mountain, Las Sendas, Superstition Mountain, TPC Scottsdale; pinnacle courses all, but just the tip of the iceberg as the valley has probably three times the available courses as does Vegas, and not a one of ‘em here requires you to pony up two car payments for a stay-here-or-don’t-play good night’s sleep so you can then pony up four car payments for golf the next day.  “Second”-tier golf courses here are named Wigwam Gold by RT Jones the Master or Raven by Panks/Graham. The true public golf is good playable golf, as well. Finally, the Valley of the Sun offers desert golf, which seems logical since it is a desert.  No one thought it somehow an aesthetic or playing-quality coup to build an Eiger of faux rock, pour Niagara over the top and then stuff it all behind the 18th green.

Sure it’s hot in the summer, but not Hades hot like you-know-where.  And no one will ever tee it up on January 1 with the thermo pegged at 48 and a 50-mile-per-hour wind tearing through from Canada. The Sonoran Desert is a lush tropical oasis compared to the higher, colder, hotter, drier and more barren Mojave.  Summertime rains kiss the rugged hillsides green.  Wildflowers and cactus erupt into a rainbow of color about the time Vegas golfers are still a good month away from being able to think about shorts.  In a word: Gorgeous.

A home-grown, family-owned company that makes some of the most acclaimed sticks in the game does its thing in Phoenix.  That’s not only cool it’s all All-American.  Anyone can walk in and get a club fitting and the booked-months-in-advance factory tour could only be improved if the Karsten family made like the Busches and handed out free samples.  As close as Vegas could get, note the past tense, was a branch of a high-end golf store that started out life … in Scottsdale.

Scottsdale is home to the most raucous, most popular and most heavily attended professional tournament on the face of the globe, and that Waste Management Phoenix Open is one of the longest-tenured tourneys on the men’s calendar.  The LPGA had a long dalliance with the valley.  The Skins Game and one of the Grump’s majors started here.  Players like Phil Mickelson, Fred Couples, Tom Lehman, Geoff Ogilvy and Grace Park, to name a few, have a collegiate and/or residential tie to the area. Hell, Las Vegas’ most famous resident golfer attended college down the road in Tucson and Tiger’s steering wide of Vegas, for obvious reasons. 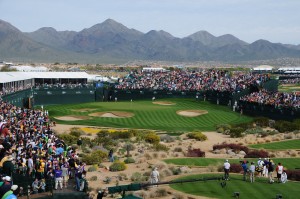 The "stadium" on 16 at the Waste Management Phoenix Open. Think Rome, less the lions, more Sambuca.

Pac-10, Super Bowls, Fiesta Bowl, Cactus League, the previously mentioned pro golf, big-time auto racing, a Major League Baseball team with a World Series banner in the rafters, an NBA franchise, an NFL team that is starting to show signs of being an NFL team and while hockey might not be a major sport to many Americans, Phoenix has the NHL, too—I know, I know, but the Coyotes still are NHL-affiliated.  In fairness, Vegas did stage ThugFest ’07, a.k.a. the NBA All-Star Game.

Vegas accommodation history is the Golden Gate and El Cortez.  The Valley of the Sun’s reply comes in the form of the Wigwam and the best-anywhere Camelback Inn, Marriott’s pride and joy.  Want it big bold and eye-popping? JW Marriott Desert Ridge.  Richly chic?  The Phoenician. Five Stars and NO stuffiness? Fairmont Scottsdale Princess.  Feel like being a part of the desert but with 400 thread-count sheets?  The Boulders.  Slinky accomms and a place literally to call home?  Xona Resort Suites.  Hyatt Regency?  Check.  Ritz?  Right there.  Four Seasons?  Uh huh.  Biltmore?  Got it.  It’s called class for a reason.

While it is hard to beat the Pinball Hall of Fame and Wayne Newton for cultural magnetism, Phoenix and environs do try to respond with, oh, the Heard Museum, perhaps the greatest artistic, cultural and sociological institute dedicated to Native Americans, and Frank Lloyd Wright’s Taliesin West, which is about as far from Bob Stupak’s vision of architectural excellence as is possible without moving into another dimension.  Also, history started here with the Hohokam building a thriving urban-agricultural community by carving out of the desert hardscape an elaborate system of irrigation channels.  Hundreds of years later dirt was moved in Vegas so the Mob could dispose of its “troubles.” And if a golfer can’t go a week without needing to call GA, there are casinos.