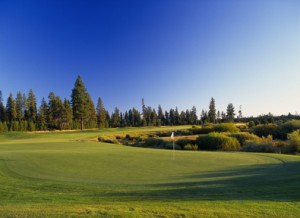 Crosswater—designer Bob Cupp’s cuddly-raucous romp through the high desert pines and meadows of Central Oregon. For those, like me, who ingest a steady diet of cactus-and-rock golf, snow-capped volcanoes as a backdrop to water hazards that exist because that’s where nature not Alice Dye put them is like closing out your best golfing bud 6-and-5.

Sunriver Resort’s Crosswater cavorts through a meadow with seasonal wetland etched by two rivers and shouldered by stands of pine. Playfulness is apt imagery for despite nearly 7,700 yards on the card—there is an altitude assist—a studs’ tee rating of 76.5 and having recently hosted the Grumps Tour’s JELD-WEN Tradition, playing the course is a four-hour session of Romper Room for Adults.

All the elements are in play: a Greek-epic length par 3; 690-yard five; don’t-hit-driver par 4s; open straightaway 400+ yarder that greets a lazy approach with a three-time-zone putt; false fronts that exists as a calling card that the putting surface is not openly disclosed (as opposed to just being something pissy tossed into the mix just because); forced carries; and a litany of options the more challenging of which, if conquered, lead to a Cuppian reward of a shorter distance in, an easier angle in, a better stance or, as the architect of Pumpkin Ridge and Old Waverly often allowed, all three. It’s good—full, unadorned, free-of-hyperbole meaning of the word—design work within a perfect environmental setting wherein the Little Deschutes River meanders in and out repeatedly, the Deschutes River frames several holes and Cascade peaks punctuate the horizon. Then there are all the critters, notably raptors. Dive-bombing osprey and eagles.  Hawks and owls, too.  And merely mundane stuff like egrets and herons. Nattering Jays.  Birdies galore, so to say. Deer, too.

As can be said about only a small minority of course, there are no dullard holes anywhere, not a one, and no slop in the Crosswater routing plan. The first dutifully departs from right next to the practice ground—how novel is that, developers?—and each nine loops back to the clubhouse without being at the clubhouse;  the greens are situated where golf logic dictates, not picture windows in the grill room.  There are no idiotic detours along the way, no Pacific Crest Trail-long gaps, to accommodate housing … arterial roadways, transmission line easements or whatever modern life can throw at the game. And here’s one for the greenies-hate-golf crowd: this Audubon Cooperative Sanctuary Program facility restored habitat degraded by decades of livestock grazing.

All this love almost never came to be as at one time the course was slated for supersizing. Cupp says 36 holes could’ve been shoehorned into the site, although it would’ve been rather unsightly, and when asked by the principal what he “really thought,” Cupp was on it.

“Do we really have to do 36 holes on the property?” he recalls questioning.  “Quite honestly, the outlines of the jurisdictional areas—the wetland to use a more common term—was something that looked like pieces of a puzzle but in reality it was more like shards of glass, broken and unusual. They gave a bunch of funny little spaces you couldn’t do much with. The wetlands are there, somebody drew a line around them and I said, ‘OK, that’s what I have to work with, we’re better off with 18 holes, let’s put the [limited number of housing] units where they really are nice,’ and the course was born.”

We’re all better for the reality check.

Cupp doesn’t subscribe to the “cornball vision moment” of design, that Archimedes-as-Architect instance of sublime enlightenment.  “I’m a planner,” he says. “The design is what the land tells you.”

As for some of what the land yielded:

Number 12, the previously mentioned MONSTER three-shotter, gets a lot of chatter. It’s a not-quite-a-cape bender that arcs to port around a lake that never leaves the hole.  That’s 10-plus acres of water as your pal all the way on the hook side for 600 or more yards. I played it with a couple local pros who teed it up from one box in front of the tips, and they didn’t even have a go. The design integrity in #12 isn’t that it’s essentially unreachable. It’s Cupp’s “two-shot strategy” wherein the shot being played dictates how the next shot will be played. Shy away from the lake, add yardage.  Shy away from the lake, find bunker, rough or a crinkled lie.  Shy away from the lake, the more you look at the lake for the subsequent shot. And you have to hit it three times, twice immensely large.

The task is wholly different, yet nearly identical on the middling length par-4 fourth. (I tackled the white/blue composite “Tournament” tees, yielding 6,800 yards in total and a mere 368 on this charmer.) Bunkers and wetland left aren’t really in play since the drive of reasoned choice is an iron/hybrid or fairway wood. I of course choose driver and luckily squeeze it far down the right side, avoiding a blocking tree. My advantage is now shooting more directly down the axis of the green, with a gap wedge in hand. Had I taken the smart play off the tee, I’d be looking at 7-iron, all carry over wetland to the short width of a green with a bunker behind and drop-a-ball/take-a-stroke past that. Because of the seeming innocence and the pucker factor, this hole would play even better toward the end of the round.

The course’s name becomes evident on five, with the first of five—minimum-scheduled/your-mileage-may-vary—crossings of the Little Deschutes, a 97-mile-long braid of blue that can’t cover more than 40 or so crow-flies miles.  It’s the walkabout of meandering waterways. This is my favorite driving hole on a course deep in great driving holes. The forced carry is no biggie, except for the fact that you’re already thinking about it. Line is the key. A hard deep cut can survive a double river-and-wetland crossing and leave something manageable into this 400-plus yarder. A controlled dryland draw can do the same. With Little Deschutes and marsh increasingly encroaching with larger and larger hunks of bite, the more prudent play is straightaway, and of course Cupp sees to it that 3-wood is best to avoid sand and a turning-away fairway edge, and of course that means a longer approach.

Choose wisely and leave the plunges to the osprey.