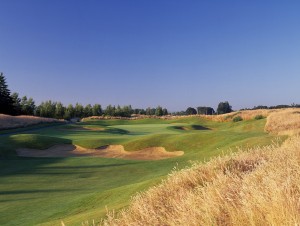 Oregon could be the richest per-capita golf state in the Union.  And while Bandon and the center-of-the-state courses get most of the press, Portland and environs tee up it well into the ranks of what the golf cognoscenti consider good stuff.  Putting it another way, there’s more to Rose City golf than Peter Jacobsen.

I revisited PDX golf with the pack of curs I call my long-time traveling golf buds, and a few locals.  Our first stop was Heron Lakes Golf Course’s Greenback track, which like us might be viewed as a scruffy dog in a pack of AKC-like champs; well, we’d surprise you, too.  Greenback is an old school parkland track that tops out somewhere around 30 bucks in season, so of course those of us who toil away in that price-overbaked world that is golf about the southwest, Greenback’s a double pleaser.  I coughed up an ugly three-putt on 18 and opened the round doing the double double-bogey thing on the easy par-5 first and commendable four-shot second.  Yet between, I captured lightening in a bottle turning for a money-making mid-‘cappers-index-plummeting 82, from the back tees.  Let’s make that a pleaser times three.

I like Greenback, and not because of what should’ve been a 70-something round.  Tweaks over the years to go along with the ample water and woodlands Robert Trent Jones II drafted into service with the original design keep the course relevant.  And while solid drivers can exact vengeance, doglegging, a quartet of long par 3s and greens that in some form resemble those that gave Jones’ dad some of his deserved acclaim restrict any pushover quality.  Fifteen is an all-risk 300-yard par 4 with an over-water carry of some 250 yards even with the bend in the hole yet it’s very easy to burn a hot lay up through the fairway right into the trees.  Make sure to hunt out the back tee set in the trees and draw it off the right-side bunker on the 400-yard par-4 sixth.

I played a little golf back in my Oregon days. Running (and skiing) was my sport then—my waistline at that time didn’t even measure up to my inseam—and I spent more time on Portland’s courses competing in cross country races during fall than playing rounds of golf come summer.  Returning to Heron Lakes reminds me that whether truly municipally owned or simply publicly accessible, the area is replete with low-buck, high-value plays.

Another Jones Dos design, Greenback’s sister course, Great Blue, is city-owned golf along the lines of Piñon Hills in Farmington, New Mexico—outstanding play, perfect complement to the terrain and environment, and available for a pittance.  The PR folks would have you believe it’s a links play; PR folks are paid to make stuff up.  Other than that, Great Blue is the real deal.  And tough.

Native grasses define Great Blue’s fairway margins and going in means no out, though there are a few spots to survive the wides, as when I played my drive on seven in front of the eighth’s forward tee, hitting a beautiful blind wedge second over trees to kick-in range for birdie and an apt reminder that golf isn’t fair or nasty or kind or vindictive, it’s just golf.  Painted across a portion of the property even more given over to marsh, lake and slough than Greenback, water not woodland directs the line of play and the wet stuff is part of the action on a handful to well over half the holes, depending on ability.

Heron Lakes sits at the fat end of the wedge of land between the converging Willamette and Columbia rivers.  That means it is close to the airport for the fly-in crowd and hard-by Portland International Raceway for motorsports aficionados.  The most notable thing about the setting, however, is all the water.  The area is natural wetland and avian wildlife abounds, hence the names of the courses and the overall club.

The ranks of the annual golf junket were thinned this go around, with guys felled by recent nuptials, coaching duties or in the case of one poor planner not checking his wife’s master family travel calendar.  Oops.  While we missed those guys, being three had advantages, the most obvious being that the three in attendance are the three of our group most given to daily doubles, of which we enjoyed several, starting at Heron Lakes.  And we’re the walkers in the crowd.

The snafus also allowed a couple Portland friends to join us for a round here and there.  A close bud from the Dark Ages of College played along (for the first 18) at Langdon Farms Golf Club.  Thin as ever, still fit (hey, I still have all my hair); when my ex-roomy met us on the range at Langdon I sensed I was in trouble since he’d always had my number on the course.  Then I saw the bag, and the irons, and a driver about the size of one of my hybrids and knew that at least that portion of his game was locked in ice c. 1985.

It didn’t matter.  Playing same old, same old bunt-ball on a 6500-yard routing—we played the blue or “Champion” tees—he was never out of play and almost always looking at some type of putt, albeit lengthy at times, for par.  I wasn’t.  Bastard.

Langdon is pastoral in every good sense of the image, save the interstate that skirts a length of the course.  The site is rolling former farmland dappled here and there with massive stands of conifers, real forest primeval stuff, and fringed in amber waves of ball-eating grass.  The administrative building is a white, gabbled, two-level affair straight from the pages of Willa Cather.  The covered portion of the range looks like a row of stables and the big red barn, a massive behemoth open to the rafters, serves the role as clubhouse. What’s markedly not farm-frontier is the food and microbrews, the Roger Dunn-grade selections in the pro shop, and the golf.  And it’s only 20 minutes south of downtown.

As for favorites, I am partial to the three-hole run starting at two, which is a pipeline par 4 measuring under 400 yards with a kink leftward about 75 percent of the way out and a narrow green set in a slot framed by mounding and backed by trees.  Three is a mid-long iron, fall-away three played into an amphitheater of firs and rhododendrons. Designers John Fought and Bob Cupp deserve props for the fourth hole, a textbook lesson in how to frame a short par four.  A heavily roughed sideboard runs up the starboard side with gunch farther to the right.  A deep, grassed, flat-bottomed depression shoulders its way in all along the left, with a stream and woodland in subsequent stages to the left.  Sequential bunkers protect the right side of the green for those approaching from the safe-drive side.  A huge sand cavity collects drives from those who try to carry the ravine without benefit of a morning dose of creatine. Stylistically it’s as beautiful as three is simply gorgeous.  It’s also eminently fair for as the teeing grounds move forward, they move ever rightward.

Thankfully I righted my game when we played the John Fought-designed South Course at dual-coursed The Reserve Vineyards and Golf Club, where I delivered a spirit-crushing beatdown on another friend and colleague.  But he had it coming for utterly humiliating me in Canada previously.

One of many one-time host courses for the Fill-In-the-Blank-With-the-Current-Sponsor’s-Name Tradition, one of the fabricated “majors” on the Champions Tour, South is at its very core solid, and a Portland area top-tier play.

The course scampers through a mix of glade and woodland, though neither wholly open nor encased in wood, so several styles of play are on the card.  The opening holes and in fact the entire front offers the greatest chance of survival for, umm, erratic players.  Saving, other-than-your-own fairways can be found and excluding wetlands so far left on three they can’t possible be in play (poke, poke, except for one duck master in our group) and a spot of water on four, errantry is at worst rewarded with a punch out.

Some time back I wrote an article featuring the best holes across the Pacific Northwest.  One that consistently came up for nomination by practiced amateurs and club pros was the 17th here at The Reserve South.  The fame is warranted.  In 2005 the senior dudes played the par 4 to an average score in excess of 4.75 and it was the 18th hardest hole on tour that year.

The hole, 470 from the back, is representative of the closing nine, which has the length of the front—backs tees nearing 3600 yards and 3400 from the blues—coupled with more strategic par-4 options, tighter drive lines, more embracing trees and a greater abundance of in-play water.

I have very fond memories of 16, a par 4 that can be reached depending on tee placement, with a stream cutting in under the chin of the green and no water long.  I of course pulled out driver.  I splashed.  Dropping short of the hazard I hit a stake-to-the-heart flop that edged the hole, stopping close enough that even my guys knew I’d not miss the miracle par save.

Walking off the green, my now victimized writer-friend looked at me, then skyward, chuckled darkly and hissed something that I can only assume was unseemly about my game or me.