The  2,000 euro first prize sees the biggest field of this seasons Gecko Euro Pro Tour tee off at Santa Clara for the second pro-am event. The newcomers who were playing in their first tour event were a very enthusiastic bunch and keen to impress.

The course was in excellent condition, especially the greens, which received positive feedback from both amateurs and professionals. The weather on the Gecko Euro Pro Tour is always good but the first day was a tad on the warm side. Never has shade from a buggy been more welcome. 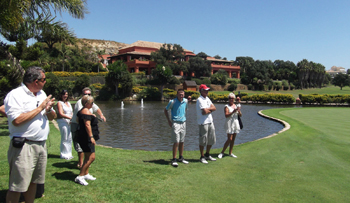 Spectators at the 18th Hole

The new Pros who were playing their first tour event really added to the mix of personalities that are emerging and this really helped to make it not only a great tournament but also added to the general banter and good humour of the tour. And with news travelling of the 2,000 first prize, professionals from Northern Spain decided to make the trek down.

Early leaders on day one were Andreas Belmonte who has featured prominently at each tour event this season, was soon joined at the top of the leaderboard by local player Max Bosse and Nick lane all on one under after 9 holes.

The conditions were perfect for good scoring, hot yes but with no wind and receptive greens, players were able to go on the birdie trail which made for some spectacular golf with players firing balls at the pins like darts.

The back nine became a walk in the park for Nick Lane, birdies at 10, 12, 13 and 17 took him to 5 under, but a closing bogey at the 18th spoilt what was a near perfect round of golf, he finally signed for a round of 67 and three shots clear of his nearest challenger Andreas Belmonte. 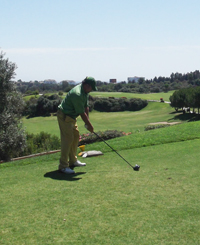 Nick Lane on his way to victory

Dawn on day two brought similar beautiful conditions, leaders Nick Lane (-4) Andreas Belmonte (-1) and Ignacio Papp (+1) made up the final group. An early move from Patrick Simard got him back to +2 for the tournament as well as Daniel Westermark who always challenges.

But the leaders exerted their presence and dominance on the tournament when Nick Lane birdied the first from 3 feet and Andreas Belmonte followed Nick’s lead with a chip in eagle at the third.

Birdies followed from Lane and Papp, all three golfers were showing why they were in the final group by playing some inspiring golf. Par golf was enough to keep Lane’s 3 shot lead intact going into the back 9.

Shots were exchanged at the 11th and 12th where both Lane and Papp bogeyed. Andreas Belmonte did have chances to cut the deficit but he missed 3 attempts from inside 10 feet.

With holes running out, Lane wasn’t going to crack, and a great up and down at the 16th from a greenside trap showed he had his nerves under control. Only a lapse in concentration at the 17th saw a 3 putt cut his lead to 2 shots over Belmonte.

A solid par at 18 meant a level par 71 was enough to win by 2 shots from Andreas Belmonte with Ignacio Papp and Patrick Simard sharing third place. A great end to a fantastic tournament won by a worthy champion.

Next tour date: The Gecko Euro Pro Tour moves on to  San Roque for a Pro Am on 13th/14th September where they expect another big field around one of the best courses in Europe. Click here to enter.