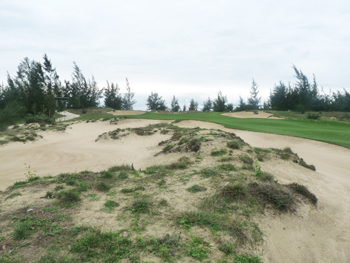 The 4th at Danang GC

I couldn’t get the sound of Robin Williams waking up the US troops with his “Gooooood Mornnnnning Vietnammmmm” in the film depicting DJ Adrian Cronauer’s time there, when I was told I would be going on a press trip to Danang in Vietnam. I was to play two tracks, one designed by Greg Norman, who is now as well known for his golf course designs as he is for winning two Open Championships. The other was designed by winning Ryder Cup captain Colin Montgomerie, who is also making a name for himself around the globe with some impressive tracks under his belt.

I arrived at the Nam Hai, one of the two impressive

My villa at the Nam Hai

hotels I would be staying in, as well as the Lifestyle resort. The Nam Hai is a villa-based resort, while the

Lifestyle resort is room-based with a couple of villas. I am writing this section of my review in the Nam Hai from a desk behind the raised bed looking out of the opened french doors of my villa, as the waves crash on the shore. I have not long come back from a yoga session followed by breakfast taken on the terrace beside the pool. I have an outside shower in my villa’s enclosed garden, (there’s an inside shower if you want, but where is the fun in that?). Showering outside is a very liberating experience and one I would truly recommend. I would also recommend staying at least one night in the Nam Hai or the Lifestyle resort; they are both worth the money for the breakfast alone. They have local chefs that you can watch produce some stunning dishes in a beautiful environment, or treat yourself to a relaxing massage and spa after a tough day at the course, in tranquil surroundings. What a great way to unwind after a three putt!!! 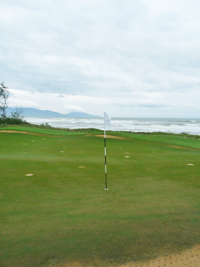 The 16th which has a stunning backdrop

Back to the golf, the first course I played was the Greg Norman-designed Danang Golf Club. I was welcomed by Phil Wright, the head professional, an Aussie lad from Melbourne, which gave me a chance to get a dig in about the Ashes; and Howie Roberts, a Welsh lad – both quality guys. Phil showed me around the course both days I played. Phil caddied for Ian Baker Finch while he was on tour and was his bagman at Augusta, but missed out on carrying his clubs when he won the Open at Royal Birkdale. He is training the caddies here, so by the time you decided to make the trip, you know they will be well worth the recommended tip.

You have a choice of four different tees to play from ranging from 7,160 yards from the Shark tees, to 5,684 yards from the Reds. The first is a nice gentle opener, a slight dogleg right of 407 yards from the Shark tees, the tee shot is played over a ridge and if you catch the down slope you will have little more than a wedge in. This is where the fun starts, the most important shot is your shot into the green, if you are on the wrong side of some of the ridges that run through the green, you will have little chance of two-putting. 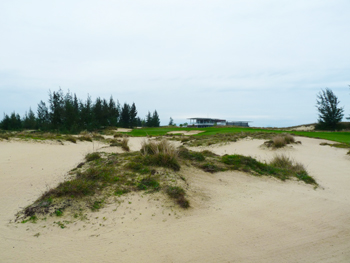 All the greens here are tough and if you put your ball in the wrong position you are looking at three putting if not more, that’s why a lot of emphasis is placed on the pin position card that you are given at the beginning of your round. I would recommend you take a lot of notice of it before you play your second shot, some greens are 40 yards deep, which depending on pin position, could be the difference between playing an 8-iron and a 4-iron into the green.

Stand-out holes for me were all the par threes, I really didn’t think there was a weak one among them and the signature 16th hole, at 148 yards from the Shark tees, is truly breath-taking. With the ocean waves crashing on the shore and the Chem mountains as a backdrop, you need to make sure you keep focused, as again position on the green is vital.  Make sure you look out for the Viet Cong pillbox between the 16th green and the 17th tee.

There are some great par 4s on the course and all the tee shots just inspire you to play well. The Danang Golf Club reminded me a lot of the tracks around Liverpool and the North West coast of England and in particular Formby, but with more sand dunes and bunkers. The tight-cut grass on the fairways and the way the ball sits up, just waiting to be picked off, as well as the whispery grass around the bunkers, will make anyone who loves links golf feel right at home.

One Response to “Deja Vu in Vietnam or is that Liverpool”