Jason Day 14/1 – with BetVictor – finished the Hyundai Tournament of Champions in great form, he also finished 2014 in a confident mood and wasn’t out of the Top 15 since the PGA Championship. He had a runners-up at The Barclays and a Top 5 at the Tour Championship. Jason also suffered with injuries for a big part of last season and looks like he is making up for lost time this year and I expect to see him challenging again come Sunday.

Another player who comes into this week in confident mood after just missing out on getting into the play-off at the Hyundai Tournament of Champions is Hideki Matsuyama 25/1 – with Coral – who has now only been outside the Top 25 once in his last five events with two of those Top 5 finishes. It’s a big year for Hideki and now he has that maiden win under his belt from last year I think we will see him win a few times this year.

Zach Johnson 28/1– with Coral – is becoming like a fine wine, he just seems to get better with age and he proved yet again how consistent he is in last week’s Hyundai Tournament of Champions, it was a great showing and he defended his title well with yet another Top 10 finish. Zach won this event back in 2009 and had a Top 10 last year where he shot every round in the 60s and I also expect him to be in the thick of it again this week.

Russell Henley 28/1– Betway – was the 2013 champion here and although he had a difficult 2014 with only three Top 10 finishes he looks to have got his game back on track for this season. Russell had a Top 3 finish at last week’s Hyundai Tournament of Champions, which was his second of the season and his 6-under par final round will see him tee it up this week in confident mood.

I am going to stick with Sang-Moon Bae 45/1 – with StanJames – this week, I liked the way he finished the back nine at last week’s Hyundai Tournament of Champions coming in with four birdies on the back nine, which made it four Top 10 finishes from four starts with one of those being a win at the Frys.com Open. Sang-Moon currently sits in second place on the FedEx Cup and with the fret of military service hanging in the background the lad has done well to not let that affect him on the course. 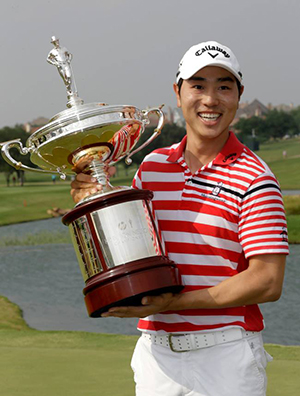 This week’s outside bet is Brian Stuard 110/1 – with StanJames – who finished this event last year in the Top 10 which made it back to back Top 10s in this event for the lad from Jackson, Michigan. Brian started this season in horrendous form missing three straight cuts, but it was last year around this time that Brian had three straight Top 6 finishes after another poor start to the season. I think the positive vibes from last year will see him back challenging this week.